Although I seem to be in the minority, I like The Bling Ring (2013, Rated R, Available on DVD). 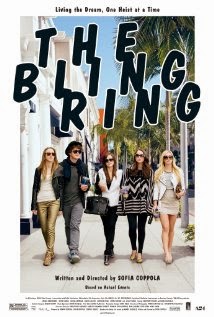 Sofia Coppola, who is one of the writers of this movie in addition to directing it, based it on a Vanity Fair article by Nancy Jo Sales called "The Subjects Wore Louboutins." Sales wrote the movie with Coppola.

It's the strange but true story (not everything in the article is in the movie) of a group of well-off California teens who start off burglarizing unlocked cars, move onto robbing the home of a "friend" who is out of town with his family, and then decide they want to own the belongings of the rich and famous. They use Google Maps and Google Earth to figure out where the glitterati live, and the best ways to reach their homes while avoiding security.

The actors are all fine. The only one of the group I recognize is Emma Watson of Hermione fame. The British beauty does a great job of jumping into the role of an obsessed California girl. Leslie Mann is also very good as one of the parents.

So why do I like this movie that only has a 5.7 rating on the Internet Movie Database?

Yes, I'll answer myself. First, because it's so bizarre that it doesn't seem as if it could possibly be true, but truth is always stranger than fiction.

I don't want to tell you the names of all the celebrities they rob and how they get into their houses. I'm afraid it would ruin the movie for you. I'll merely mention that the scenes in Paris Hilton's house are actually filmed in Paris Hilton's house, and the DVD has an extra feature with Paris showing off her digs and pointing out spots pf particular interest to the burglars, such as her shoe room and jewelry closet. Hilton's decor is so lavishly narcissistic that I find it amusing.

I like the kids' strange attitudes, too. They are deadpan when they talk about what they're doing.

Nicki: I want to rob!

Finally, I think Sofia Coppola is a good director. The Bling Ring is well made. Coppola tends to choose a good color palette, and the movie has some great shots, especially one of a couple of kids from a distance when they're inside a house that is that almost all windows. I like the security camera footage, too.

What can I say? You have to see a movie like this to believe it.

Nancy Jo Sales has expanded her article into a book called The Bling Ring: How A Group of Fame-Obsessed Teens Ripped Off Hollywood And Shocked The World. It's on my Amazon Wish List.

As for kids, no. Teens? Be cautious. You don't want them to think stupidity is cool, whether it's the ignoramus kids or the foolish famous.

The Bling Ring earns The Janie Junebug Seal of Approval.