Today I present for your consideration a movie about which I have mixed emotions. It's The Wolf of Wall Street (2013, Rated R, Available on DVD, Directed by Martin Scorsese). 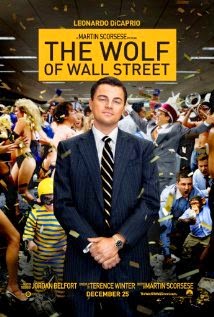 DiCaprio's performance in Wolf is outstanding. Last year I predicted that DiCaprio would win the Best Actor Academy Award for The Great Gatsby, which was not adored by the critics and the public quite to the extent that I loved it. DiCaprio was instead nominated for Wolf, but of course that little gold guy went home with Matthew McConaughey for Dallas Buyers Club. I felt that MM deserved his award––until I saw Wolf. DiCaprio is so good, so intense, so caught up in his role, that I can't say one of the actors deserved the award over the other.

I must point out, however, that McConaughey has a small role in this movie. His sequence in a restaurant with DiCaprio is hilarious. Some other aspects of Wolf that are supposed to be funny did not have me laughing. I'd say "gawked in amazement" is a better description, or I was bored by the "joke" because it was too obvious.

I have great respect for Martin Scorsese. I have yet to see a movie directed by this man that I didn't think was brilliant. Wolf is brilliant, right down to the strange cuts that are used when characters are high.

Here are my problems:

According to the Internet Movie Database, Scorsese gained independent financing for this movie so he wouldn't have to fight with a studio over the more prurient aspects of Wolf, but he had to tone it down to avoid the NC-17 rating. IMDb states:  Leonardo DiCaprio says that he and Martin Scorsese were able to 'push the envelope' with their depiction of over-the-top sexual acts and scenes in "Wolf" and 'make the movie they wanted to' primarily because the production was financed independently, and not by any major studio. Scorsese did however edit some sexual content and nudity to avoid an NC-17 rating at the request of the MPAA.

I still say it should be rated NC-17, and I suspect Scorsese received special consideration from the MPAA because he's Scorsese. Heck, I would probably make coffee for Scorsese if he asked me, and I don't make coffee.

I suspect you've already figured out that this movie is not for children. I wouldn't show it to teenagers, unless they're at least 18 and mature enough to understand that the lifestyle portrayed here is not pretty and exciting.

The Wolf of Wall Street earns The Janie Junebug Highest Seal of Nastay and the Highest Seal of Approval. Two seals. I don't think I've ever done that before, but I've never seen a movie like Wolf before.

Happy Viewing! Make sure the kids are tucked away and won't be wandering out for a drink of water while you're watching this one.