Willy Dunne Wooters and I watched Nebraska on DVD Saturday night (2013, Rated R, not for kids unless you watch with older teens but check it out first). We loved it. In fact, after about 20 minutes I pushed the pause button because we had to talk about it. We both said, How did someone manage to make a movie about our parents and their families? 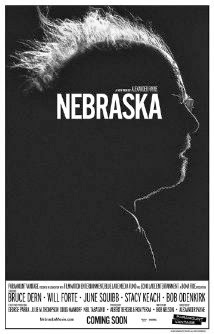 Woody Grant (Bruce Dern) lives in Billings, Montana. He wants to go to Lincoln, Nebraska, because he believes he has won a million dollars from a company there. Woody also has dementia, and his wife, Kate (June Squibb), won't take Woody to Lincoln. She's had just about all she can stand of him and wants to put him in a home.

Woody's son David (Will Forte) steps in and offers to drive Woody to Lincoln. Although David and his brother feel their alcoholic father never cared about them, David wonders how much longer Woody will be around. Along the way, they stop in Woody's hometown, which he hasn't visited in years. They stay with a relative, where David's two cousins sit on the couch in tandem and harass David; Kate, and David's brother Ross (Bob Odenkirk), join them; and all of Woody's brothers come over to see them.


David Grant: ...and all your brothers are coming over today, remember?
Woody Grant: Some of 'em are dead.
David Grant: The dead ones won't be here.

It was all the stuff with the relatives that had us howling with laughter. It's a bunch of people who aren't really in touch with one another, and they sit around staring at the TV and saying the same things over and over. David's cousins belittle him for driving so slowly. Willy Dunne Wooters said that his dad would say the exact same things that the characters in the movie say: How long did it take ya to get here? What kind of car you drivin' now? What's the matter with ya? Do you remember this person and that person?


Aunt Flo: Martha, where's Bart and Cole?
Aunt Martha: Oh, they're off doing some volunteer work picking up trash off the streets.
Kate Grant: It's community service; for Bart's rape.
Aunt Martha: Sexual assault!
Kate Grant: What's the difference?
Aunt Martha: A huge difference... it's... well... the boys can explain it to you better than I can...

They even visit the town cemetery, which I swear was very similar to a cemetery stop we made in North Dakota, though my mother was not as profane -- nor as funny -- as Kate Grant.


Kate Grant: [looking at graves] There's Woody's little sister, Rose. She was only nineteen when she was killed in a car wreck near Wausa. What a whore!
David Grant: Mom!
Kate Grant: Nah, I liked Rose, but my God, she was a slut.
David Grant: C'mon...
Kate Grant: I'm just telling you the truth!
David Grant: Where's your family?
Kate Grant: Oh, they're over in the Catholic cemetery. Catholics wouldn't be caught dead around all these damn Lutherans.
[Approaches another tombstone]
Kate Grant: Here's Delmer, Woody's cousin, he was a drunk. One time we were wrestling and he felt me up. Grabbed a handful of boob and Woody was right there and didn't have a clue, did ya Woody?

What I'm getting to here, is What movies or TV shows feel as if they're based on your family or on your life? Why do you relate to them?

I might as well finish reviewing Nebraska now that I've told you this much. I don't want to reveal more about the plot because I'm afraid I'll ruin the movie for you. Bruce Dern is so good as Woody. What a way to top off a great career. He was nominated for a Best Actor Academy Award. June Squibb was nominated for Best Supporting Actress. I enjoyed her tremendously. The movie didn't win any Academy Awards, but it's great. It was directed by Alexander Payne, who has directed some other movies I like a lot, including Sideways.

WDW and I agreed that the movie doesn't need to be in black and white. We felt it was an affectation that added nothing to Nebraska. But we love the characters, the screenplay, and the acting. This movie also incorporates one of my favorite themes: the interconnectedness of humankind. Woody's relationship with David may not change as far as Woody is concerned, but David is changed by the road trip. Will Forte gives a quietly beautiful performance.

Now, how about you? What movies or TV shows feel as if they're based on your family or on your life? Why do you relate to them?

I look forward to reading your answers. I'm also curious about one other point: Did you need to grow up in a certain part of the country during a certain time period to appreciate this movie, or can anyone like it? If you've seen it, then please tell me what you think.