Today I present for your consideration another movie based on a true story. It's Captain Phillips (2013, PG-13, Available On DVD).

I'll address the truthiness, or lack thereof in this movie, in a post following this one. You might not want to read the truthiness post until you've seen the movie because it will have some spoilers, though I think most people know how this story turns out. 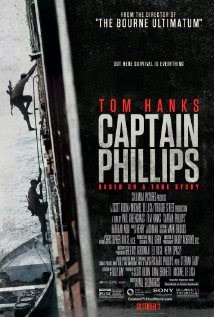 Captain Richard Phillips (Tom Hanks) takes command of the Merchant Vessel (and thus, unarmed) Maersk Alabama during 2009. Somali pirates come after the ship. Phillips and the crew do what they can to keep the pirates from boarding the vessel, but the pirates succeed. Eventually, they leave the ship in a lifeboat, taking Phillips with them. A major feature of the film is the cat and mouse game between Phillips and the pirates' leader Muse (Barkhad Abdi). Who is the Captain now?

This movie had me on the edge of my seat even though I watched two documentaries on Netflix Screaming about the Alabama and knew what was going to happen. I also recall news accounts from the time, yet I feared for Phillips and other crew members. Captain Phillips is an action/adventure feast, with outstanding performances by Tom Hanks and Barkhad Abdi. I don't know why Tom Hanks wasn't nominated for an Academy Award, but if he had been, who would have been left out? Although I love Jared Leto's Academy Award winning performance in Dallas Buyers Club, Abdi was nominated for Best Supporting Actor, too. Abdi actually outshines Leto. Abdi goes toe-to-toe with Hanks all the way.

The scenes in the lifeboat (which was a model built to scale) are claustrophobic and terrifying. The sight of the Navy SEALs parachuting in is overwhelming. I had tears in my eyes. The SEALs deserve more attention in the film. They played a vital role in the mission, but I understand that the focus is really on the tension between Phillips and Muse.

The one thing I wanted to see in this movie that didn't occur was a volleyball floating by he ship and Tom Hanks shouting, WILSON! I'm just kidding. (Not really. That could have been the very best part.)

Captain Phillips is beautifully made. It earns The Janie Junebug Highest Seal of Approval.

I wouldn't allow young children to watch this movie, but teenagers, yes. As always, I urge you to watch the movie before allowing your kids to watch.