That's right: This week, and this week only, you get three movie reviews for the price of one. The price of one is zero, zip, nada, and 3 x 0 = I spend too much time watching movies.

I put these three movies together because they all strike me as having unusual conclusions, as in we kinda don't see the actual conclusion, but we have hope for a happy ending. Obviously, I can't tell you what the conclusions are. You have to see them for yourself. 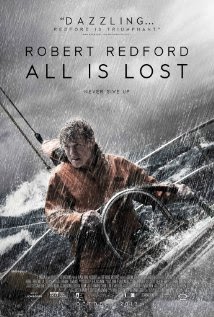 The man, a guy, some sailor -- we don't know his name, but he sure looks like Robert Redford to me -- is out at sea on his 39-foot yacht. He awakes to find he's collided with a shipping container. The title tells you what the rest of the movie is about, but it's worth watching because it happens to be very good for a film with virtually no dialog.

All Is Lost is beautifully made, and Redford is perfection.

The second movie is Prisoners (2013, Rated R, Available On DVD). 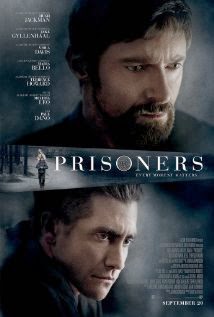 Two little girls disappear. Their parents are Keller (Hugh Jackman) and Grace Dover (Maria Bello), and Franklin (Terrance Howard) and Nancy Birch (Viola Davis). The families begin the search for the two six year olds, but quickly call in the police and tell Detective Loki (Jake Gyllenhaal) that an RV with someone inside it had been parked on their street earlier in the day. Keller Dover, frantic with worry and grief, searches for his daughter himself when the police find nothing.

With the first movie, I simply watched as one thing after another was lost until all was lost. Prisoners, though, is the kind of movie that has me wanting to see what happens next, but dreading it at the same time. Paul Dano (as Alex Jones), who is so funny as the son/Olive's brother in Little Miss Sunshine, scares the bejabers out of me in this movie. Hugh Jackman is outstanding.

This movie is great, but I warn you: It's frightening. It originally received an NC-17 rating. Some scenes were cut to get the R rating, but you know what that means, right? If you don't, it means they put stuff in the movie knowing it would get cut so they could keep scenes they really wanted and were afraid they'd have to cut if they didn't have sacrificial lambs.

The third movie is the Coen brothers' latest, Inside Llewyn Davis (2013, Rated R, Available On DVD). 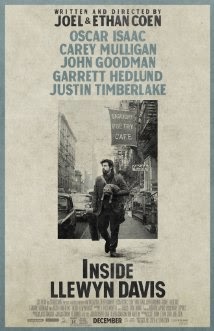 Llewyn Davis (Oscar Isaac), a Greenwich Village folk singer we follow during one week in 1961, ends up thinking all is lost. His former singing partner has killed himself. Llewyn is broke and has no place to live. He begs to sleep on friends' couches. At one house, he accidentally lets the owners' cat escape. They aren't too happy with him. Another friend (Carey Mulligan) doesn't feel so friendly toward Llewyn. His sister is pissed off at him. He leaves New York for a brief sojourn to the Midwest, where he stops to see his father in a nursing home. He plays his guitar and sings for his dad. I can't tell you what his father's response is.

Maybe all is lost for Llewyn, and maybe it isn't. I have one, and only one, clue for you: The name of the cat is Ulysses, the Roman name for the Greek Odysseus, who travels so far and for so many years before he finally reaches his home.

The ab-fab Juli at Surviving Boys told me she'd heard from a friend that a movie was "cerebral". I can't remember if she said it was Dallas Buyers Club or Captain Phillips. Juli, Inside Llewyn Davis is the movie that's cerebral, but it's worth watching and pondering. Oscar Isaac is excellent, and I always love Carey Mulligan.

All Is Lost, Prisoners, and Inside Llewyn Davis all earn The Janie Junebug Highest Seal of Approval.

Sorry I rushed through this post. Does it feel rushed? I need to edit some more.