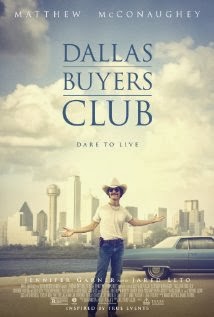 It's 1985 and Ron Woodroof (Matthew McConaughey) -- an electrician and sometimes bull riding rodeo hustler -- uses coke, has unprotected sex, drinks heavily, smokes, and in general, lives a rough life. Injured at work, he's taken to the hospital, where doctors tell him he has HIV and only 30 days to live. Woodroof is a homophobic redneck who refuses to believe he's contracted a "faggot" disease.

Ron Woodroof: Let me give y'all a little news flash. There ain't nothin' out there can kill fuckin' Ron Woodroof in 30 days.

Before long, Woodroof has to accept that he's ill, so he researches HIV and AIDS and finds medications he believes can help him. But they're not FDA approved. He sets out for Mexico where he can receive alternative treatments, and brings the unapproved treatments back to the U.S., where with a transgender addict named Rayon (Jared Leto), he sets up the Dallas Buyers Club as a way of providing prohibited medicine to the people who need it the most.

I am so moved by this film. It's because of people such as Ron Woodroof that HIV is no longer an almost immediate death sentence in the U.S. Woodroof and others fought doctors and the FDA to improve treatments for HIV/AIDS patients. Dallas Buyers Club is based on a true story, but I don't know what kind of person the real Ron Woodroof was. In the movie, the character changes significantly, and for the better.

I mentioned in a post a couple of days ago that I didn't care for McConaughey. I've changed my mind. Susie at peaked in junior high assured me I would respect him after seeing this movie. She was right. This role is perfect for him. I admire him for going to such lengths to play Woodroof (he lost 47 pounds so he would look gaunt and ill). He deserved his Best Actor Academy Award.

I don't know if I'll like him in the future if he goes back to making silly rom-coms that waste his talent, but right now, I like Matthew McConaughey very much.

Jared Leto's inner beauty shines through in his role as Rayon. Rayon's presence teaches Woodroof that gay people are human beings. The Internet Movie Database states that Leto remained in character during the entire shoot, even going grocery shopping dressed as Rayon. Leto lost 30 pounds to play the part. Leto's commitment to the role helped him earn his his Best Supporting Actor Academy Award, which he richly deserved. Rayon breaks my heart.

The one false note -- at times -- during the film, is Jennifer Garner as a doctor named Eve. During the first part of the movie, she's kind of sickeningly sweet. Her character becomes tougher and more realistic as she fights to help her patients.

Dallas Buyers Club is filmed in a rough, raw style that's appropriate for the story.

This movie earns The Janie Junebug Highest Seal of Approval. It absolutely is not for children. You might want to watch it with older teens so you can discuss casual sex and how AIDS patients were treated during the 1980s, before Magic Johnson announced that he was infected and all of a sudden, HIV wasn't quite so frightening anymore. But that doesn't mean we can be lax. There's no such thing as safe sex -- only safer sex.

I sit here in my little house, wondering how to express to you the feelings that I have just minutes after watching this movie. I think I can sum it up by asking, If I'm not here to show compassion and kindness for humankind, then why do I exist?

I wish you knowledge and a blessed viewing experience with this excellent movie.