FUN TIMES WITH BONNIE AND CLYDE

Last week I told you TEN FUN FACTS ABOUT BONNIE AND CLYDE. This week I'll give you a taste of what it was like to run from the "Laws" with the Barrow gang. (What I would say as Bear-oh seems to be pronounced as Bear-uh by many Texans. I learned this from some homemade videos.)

I imagine the most well-known members of the gang besides Bonnie and Clyde were another Barrow, Marvin -- known as Buck -- and his wife Blanche. Buck was Clyde's older brother and is widely credited with leading Clyde into a life of crime. 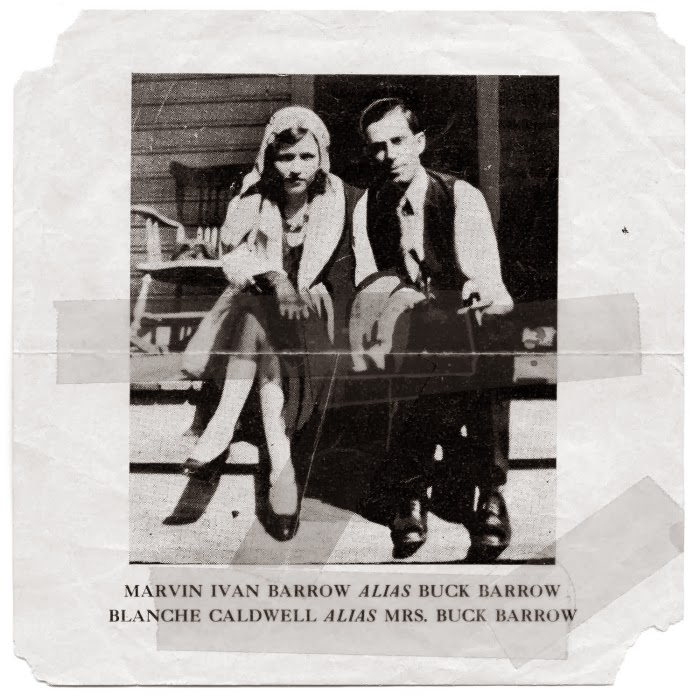 Buck had been married and divorced twice and had three children when he met Blanche. They married in 1931. After Buck finished serving a prison sentence in 1933, the two joined Bonnie and Clyde. They were with the gang for all of four months.

Between April and June, Buck and other gang members killed three officers. On July 19, 1933, police had a shoot-out with the gang at a tourist court (the precursor to cheap motels) in Missouri . They shot Buck in the head and wounded Blanche, but the gang got away. Blanche had glass shards in her eyes from the windows of the car being shot out. She ended up blind in one eye. A mere five days later, a posse caught up to the gang again, shot Buck in the back, and captured Blanche.

In this rare action photo, Blanche screams at officers not to shoot the dying Buck again: 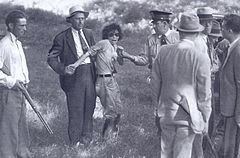 Blanche also cried out, Don't die, Daddy. Yes, she called Buck "Daddy". I think it's safe to say that Blanche had daddy issues.

Buck was hospitalized in Iowa. Police visited to interrogate him. He lived another five days -- long enough for his mother, Cumie (pronounced Coomie), and her youngest son, L.C., to make the drive from Texas to be with Buck during his last hours. Buck died July 29, 1933. Here's Buck in the hospital: 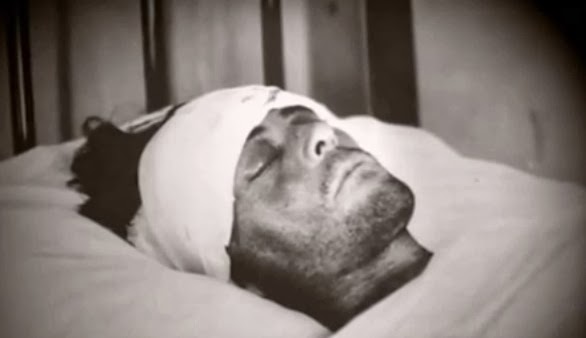 Dept. of Justice files read: "Due to the lack of medical attention, the wound in Barrow's head, gave off
such an offensive odor, that it was with utmost difficulty that one could remain within several feet of him."

Blanche was extradited to Missouri for participating in the shooting of an officer and sentenced to ten years. Here's Blanche's mug shot: 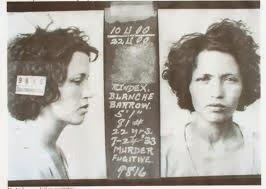 Blanche served six years. The entire time she was in prison she maintained that she had not participated in any crimes and was with the gang against her will. The pose helped her gain the early release. Although it seems to be true that Blanche didn't want a life of crime, she definitely worked with the gang, which she admitted later.

I don't want to bore you with an overly long post, so I'll tell you more about Blanche, definitely one of the most interesting members of the Barrow gang (probably because she managed to live longer than the rest) on another day.

Gene Hackman was on the set one day when he noticed a guy standing behind him and staring. The man said, "Hell, Buck would've never wore a hat like that." Hackman turned around and looked at him and said, "Maybe not." He looked like an old Texas farmer. The man introduced himself and said, "Nice to meet you - I'm one of the Barrows."

I don't know how you feel, but being aware of Blanche and Buck's four-month sojourn with Bonnie and Clyde leads me to believe that joining a gang of criminals is not a good idea.

More about Blanche and other gang members on another day! Woo-hoo! Let the good times roll.

Janie Junebug, who can't sleep though it's very late on Sunday night because she's all messed up by DST and spending too many hours asleep earlier in the day, cuddled up next to the extraordinarily cuddly Willy Dunne Wooters
Posted by Janie Junebug at Monday, March 10, 2014