The first movie I present for your consideration is called Won't Back Down (2012, Rated PG, Available On DVD). 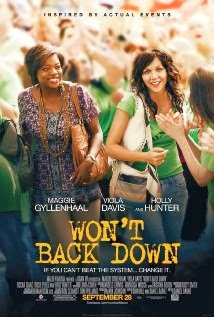 Jamie Fitzpatrick (Maggie Gyllenhaal) has a young daughter who has recently had to start attending a different elementary school. Malia (Emily Alyn Lynd) has learning disabilities and isn't receiving the help she needs at school. Her teacher seems indifferent and even cruel. Jamie learns about charter schools and convinces teacher Nona Alberts (Viola Davis) to join her in fighting the school board, the teachers' union, and some of the other teachers to transform this failing school into a charter school, where parents and teachers will be in charge of the way the children are educated.

This movie is not brilliant, but I like it. Viola Davis's quiet intensity further convinces me of her acting abilities. I first saw her in The Help. Won't Back Down isn't a great vehicle for Maggie Gyllenhall -- I like her more in quirky, indie movies -- but actors need to earn money, too. Although this movie is inspiring, it's anti-teachers' union. A number of the teachers, and the union that represents them, are presented in a bad light. I don't know how I feel about that. I think unions are important, although the teachers' union did nothing to help me when I was fired.

I'm also a bit bothered by the way Jamie cares for Emily. Jamie jumps out of bed at the last second to drag Emily off to school with Emily trying to choke down some breakfast on the way. Yes, Jamie works hard to fight for her daughter to have a better education, but I don't see her giving Emily the personal attention a child needs. Emily always looks forlorn and in need of a bath and hair brushing.

If one sees this movie as being in favor of children and their education, then it's good. I'm not sure if charter schools are all that great. They don't seem to do much better than regular schools. However, I don't think it's that difficult to overlook Won't Back Down's faults and enjoy Jamie and Nona fighting for the good of children. This movie should be a good one to watch with your children, maybe 8 - 10 years or older.

Won't Back Down earns The Janie Junebug Seal of Approval. 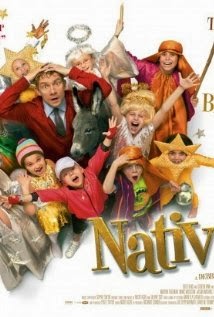 I don't care that it's not the Christmas season. I would watch this movie any time of year.

Primary school teacher Paul Maddens (Martin Freeman) is given the task of putting on the school's annual Christmas play. Mr. Maddens is appalled. He was put in charge of the play once before, and it was a disaster. He majored in theater, or participated in a drama society at university (I'm not sure which), and his arch rival from those days teaches at a better school, which always receives the best review of a Nativity play by the local newspaper. But Mr. Maddens is stuck with this job, and he sets about it as angrily and grudgingly as he teaches the children in his class.

Nativity! is another feel good movie, and one about which I don't have any serious reservations, except it has more profanity than I would expect in a PG movie, but maybe I remember it incorrectly.

Nativity! is adorable and funny, and it even has a magical feeling at the end.