Recently my partner in crime Carol and I attended a concert by a man who has been called schlocky, overly sentimental, and just plain lousy.

That's right: We saw Barry Manilow, and we loved every minute of it. 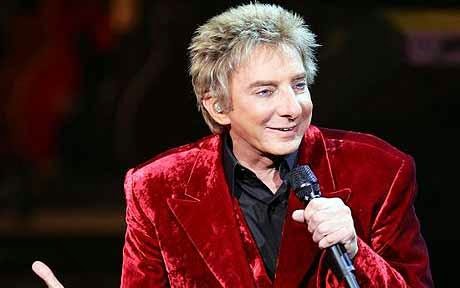 Barry was probably at the height of his popularity when I was in high school. My friends and I sang along to "Mandy" and "Weekend In New England".

I'm grateful for the opportunity to listen to a singer who has been such a big part of my life, but I was also thrilled that I didn't see a single person leaving the arena who looked unhappy. With everyone singing along, it became an evening that represents the interconnectedness of humankind. We can be at one through music.

Barry sounded a little hoarse, but oi! could he hold a note. He also moves with care and caution when he dances. I Googled him when I got home and was surprised to learn he's 70! I hope I'm still singing and dancing when I'm 70–not that anyone wants to be my audience.

Does anyone else remember loving The Midnight Special?
Posted by Janie Junebug at Tuesday, February 04, 2014