I have an outstanding book for you today. It's No One's Daughter, a memoir by Jasmine Bath about growing up with an abusive mother. Bath states on the back cover of the book that the events took place during the '60s and '70s, when she was a child, and says: "I wrote it in an attempt to shed light on the ghosts that have haunted me for a lifetime, hoping that by putting them down on paper that I could look at them more objectively from a mature point of view and eventually free myself from them."

Please note that Ms. Bath gave me a copy of this book, knowing that I would review it. I will not profit from this review in any way other than sharing my admiration of the book with you. 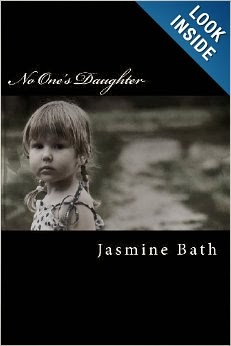 Let's begin with my interview with Jasmine Bath, and then I'll review the book.


It was probably a combination of all those things and more. There was a period of hatred, confusion, and anger regarding not only my mother, but toward all the things that my sisters and I endured during the childhoods we never had. As an adult, I suffered from triggers that I didn’t fully understand until I began writing about the incidents and that allowed me to understand why I reacted the way I did in certain circumstances.

As difficult as the writing process can be, publishing as an indie is not for the faint of heart. Your work will be, consciously or unconsciously, scrutinized by every person who reads it. When publishing a memoir avoid the temptation to embellish or exaggerate, readers will pick up on that and feel their intelligence has been insulted and rightfully so. Tell your story as honestly as possible but don’t feel you have to write the things that you still keep closely hidden in your heart if you aren’t ready to bare that part of you.

My children are all adults now but they’ve always been somewhat aware of my childhood being very different than their own. They’ve always known that it is very important to me that they understand how much they’re loved, how much I value them and believe in them because I never had that in my own life.The kids have been tremendously supportive regarding the book.

When my older children were young, I tried to have a relationship with my mother and sisters so my children could have a sense of family. Unfortunately, my mother and sisters remained who and what they are, never breaking free from the dysfunction or the drama, never seeming to acknowledge it or wanting something better. My mother had no real interest in having a relationship with my children or me and I felt that it served no purpose in allowing them to be shunned and ignored by her. I was used to it but couldn’t allow her to do it to them. I always knew that I didn’t really have anything in common with my sisters but after a lifetime of feeling obligated to somehow be there for them, I tried for many years to have a relationship with them as well but when I reached the point of being drained financially by one and emotionally by both, I finally had to walk away.

My mother is a very old woman now. I have not had any contact with her in many years. She has grandchildren who would not know her if they passed her on the street, nor would she recognize them. She has great grandchildren that she has never met nor shown an interest in knowing and they have no idea that they even have a great grandmother. My own children have individually made the decision to not have my mother or my sisters in their lives or the lives of their own children.

My original intention was to write about some of the things that happened in my childhood in order to look back at them from an adult perspective. I had hoped that maybe it would be similar to going back to your childhood home, when you go back and realize that the huge house you remembered was actually not all that large. I wanted to put all my childhood demons on paper so I could look at them as an adult and convince myself that they weren’t really all that terrifying. I was trying to convince myself that my nightmares, my triggers and phobias were the result of the over exaggerated memories of a child.

Once I began writing about the incidents, it became very apparent to me that I could have very easily been another statistic of a child that was killed by a parent. I had always allowed my mother to ‘explain’ away things but it never took the pain away. When I was able to write and remember the pain of what really was, it was immensely cathartic, very much a bloodletting. That was another thing that completely took me off guard, realizing how many people knew or suspected what was going on and did nothing proactive to help my sisters and me. Of course it was different back then, there was no active CPS and domestic violence and child abuse were considered ‘private family matters’ but I’ve often wondered how much different my own life would have been had someone forcibly stepped in to protect me.

When I began writing, the words came forth as if they had burst through a dam. There was no hesitation because in memoir writing, you’ve already lived what you’re writing and you know how the story ends. My biggest struggle after putting all the incidents I wrote about into chronological order was deciding what chapters I would not publish; eventually I published it without ten of the original chapters. This was done because there were incidents that I was not comfortable sharing.

7. Do you have plans for any other books?

I do, several. Right now I’m trying to navigate through a recent health issue that is keeping me completely distracted but as soon as I can pull myself together mentally and emotionally, I’ll begin writing again.

And now for my review:

I recommend this book with all my heart. I had difficulty remembering that it was about the 1960s and '70s because Bath is so adept at telling her story through the eyes of the child she was. She not only had to make a day-to-day Herculean effort to keep herself alive; she took care of two younger sisters who were alternately spoiled or ignored by their mother:

I don't remember what it was like before Julie was born, I've been taking care of her for so long that I can't remember what it's like to get up in the morning and not have to dress her, try and find her something to eat and spend all the time that I'm not in school with her. She even sleeps with me at night so if she wakes up crying I can take care of her so she doesn't wake Mom. I tell her stories at night so she'll go to sleep and I'm the one she comes to for everything else.

Children at school shunned and abused Bath because her clothes were dirty, and she didn't have lunch money. Her mother's favorite "game" was pretending to be dead to terrify Bath and force her to profess her love and beg for forgiveness. Why did she need forgiveness? She had enraged her mother for no true reason -- enraged her to the point that Bath was physically abused by her mother and a string of boyfriends her mother brought into their small homes.

What bothers me the most is that NO ONE INTERVENED to help these children. How could adults in their neighborhood and at the school not realize that something was wrong? No doubt they knew. It's easier not getting involved.

You know I'm not one to be at a loss for words, but I'm having difficulty telling you how much this book means to me and how it affects me. It's so well written -- no histrionics. Just the simple story. It touches me deeply.

Even more important is the fact that, without saying so explicitly, No One's Daughter sounds an alarm for all of us to be engaged with the circumstances in which our neighbors live -- to keep an eye on children everywhere and to never be afraid to call attention to the fact that help is needed. If we can't do anything ourselves, then we need to call the police or call Child Protective Services. We just need to be more aware.

So many of you are snowed in. Take advantage of the opportunity to read this book, available as an e-book or a physical book. You can buy it from Amazon at http://www.amazon.com/No-Ones-Daughter-Jasmine-Bath/dp/1482352141 or from barnesandnoble.com at http://www.barnesandnoble.com/w/no-ones-daughter-jasmine-bath/1113284494?ean=9781482352146.

I hope that in some small way I've done this book justice. It cries out to be read.