A lot has happened with the painting and organizing Favorite Young Man and I have started in my little house. I'm grateful for the good and the bad.

First, I must admit I seldom remember to take BEFORE pictures, so I guess the AFTER pictures are less striking.

Let's start with the entry to my house. I remembered to take the BEFORE pictures here: 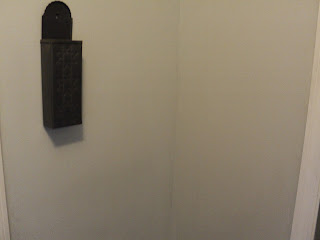 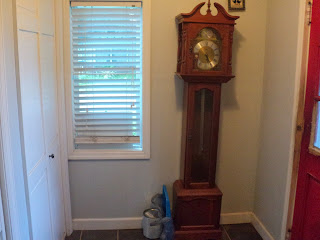 So dull and bland, don't you think? Then Favorite Young Man painted. Instead of calling this area the entry, I think it now deserves to be called the foyer. When Willy Dunne Wooters first saw it, he said, It's so bright and cheerful. 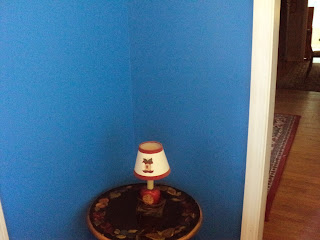 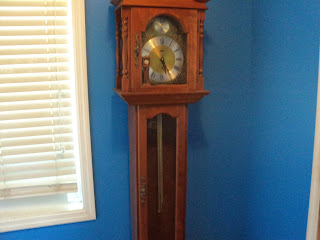 I have three large shelves in my bathroom. I organized the bottom two. Take my word for it, they looked quite pitiful before. 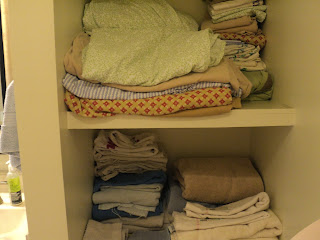 Sadly, I didn't take photos of the kitchen before Favorite Young Man painted it. It was kind of a pea green. It didn't look right with white cabinets and the white tile back splash and black counters. You can see only a sliver of its beautiful new red paint in the following photo. I took this shot mostly so you can see what I'm up against in the kitchen. Kitchen, you are on notice: You're being organized. Also, you can see a bit of these cubby hole thingies that are on two sides of a corner cabinet. I've never been able to figure out what they're for, so I had something cutesy – such as my miniature Tupperware – in the front of each one. It was wasted space. 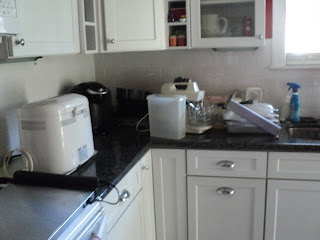 The cubby hole thingies are now organized. It's the one part of the kitchen that's finished, other than the paint. The thingies now hold stuff like mugs, salt and pepper shakers, a butter dish, oven mitts, yada. 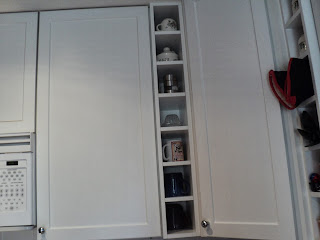 Now, here's the tale of the bad thing that happened over the weekend, but I'm grateful that I discovered it before it got worse.

I have a "linen" closet in the hall near the extra bathroom – the bathroom that's for everybody except me. I'm very territorial about my bathroom – the mistress bath. I seldom get anything out of the hall closet. It held extra linens and some large kitchenware. As part of the kitchen reorganization, I knew that the closet had to be organized and relieved of its kitchenware. Kitchen stuff belongs in the kitchen.

On Saturday while Willy Dunne Wooters was watching college football, I decided to take everything out of the hall closet. I found a problem quite quickly: two holes in the wall on one side and droppings all over the closest shelf.

Willy Dunne Wooters checked it out and said, Oh, some little mice got in there.

I said, You're just trying to make me feel better. A rat has been in that closet, and his name is not X.

I had to throw out some papers I'd stored in the closet because they were covered in rat poop. I felt sick when disposing of these items. It's not that I needed the papers. It's that A RAT HAS BEEN IN MY HOUSE! I'm very surprised, but very grateful, that it did not make its way down to the bottom of the closet and run out from under the door to search for food and water. Perhaps it sensed the presence of the dogs.

I'm in the process of washing all the linens that were in the closet. As they come out of the dryer, I fold them and organize them nicely in the closet.

Willy Dunne Wooters thinks a rat came up from the crawl space into the area where the plumbing is for the public bathroom and then chewed the holes so he could take a look at the closet.

I'm very grateful for Willy Dunne Wooters' help, and I'm going to post a sign for the rats: 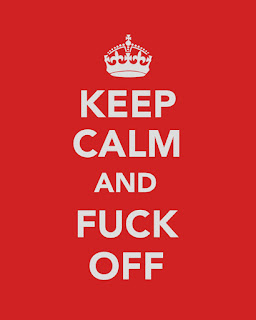 That's right, rats. Calmly remove yourselves from the crawl space under my house and get the hell out of here. Otherwise, Harper will dispose of you, and believe me, you won't like it.

So that's where we stand, or sit, or lie, depending on how tired we are. I'm grateful to Favorite Young Man for painting. I'm grateful I discovered the problem in the closet before it got worse (and I'll be checking that closet regularly for new holes). I'm grateful to Willy Dunne Wooters for helping out with the repairs to the closet and for trying to help me feel better.

P.S. This post is #997. I haven't worked on the giveaway yet. Haven't had time, what with the rat invasion.