Today I present for your consideration a Lifetime movie called Ring of Fire (2013, Available on DVD). 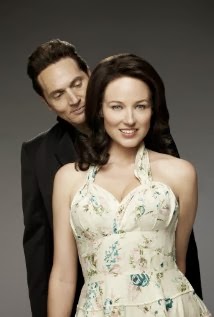 Some of you may recall the excellent bio-pic, Walk The Line, about Johnny Cash, including his great love affair with his second wife, June Carter Cash. Reese Witherspoon won the Best Actress Academy Award for playing June, and Joaquin Phoenix is excellent as Johnny. Both performers learned to sing and play instruments for the movie.

Now we have Ring of Fire, which purports to be a drama told from June's point of view about Johnny (Matt Ross) and June's (Jewel) very dramatic relationship, which was made even more dramatic by Johnny's drug addiction. The problem is that the movie isn't dramatic. In fact, it's pretty boring. Matt Ross (never heard of him before) makes a lousy Johnny Cash. Jewel isn't much better as June.

This movie not only lacks bite; it doesn't have any teeth. Ross and Jewel look especially ridiculous when they're made up to be the aging performers.

I don't watch Lifetime movies because they tend to be schmaltzy and dumb. I put Ring of Fire in my Netflix queue because it was nominated for some Emmy awards, winning none. But I hoped it would be better than the average Lifetime movie, and I love Johnny Cash–and June. I ended up disappointed.

Ring of Fire earns The Janie Junebug Seal of Don't Waste Your Time.

If you want to see a good movie, watch Walk The Line, which earns The Janie Junebug Highest Seal of Approval. If you've seen it before, it's worth watching a second time or even a third. I haven't viewed it in quite a while, so I think I'll check it out again. It will take the bad taste of Ring of Fire out of my brain (call me Mrs. Malaprop).