We're starting MOVIE WEEKEND early because we have a long weekend coming up and not everyone watches football or goes shopping. I certainly won't go shopping, but if Willy Dunne Wooters wants to watch just a little football, I can use the time to decorate my Christmas tree. Or I can sit next to him and make fun of the game. 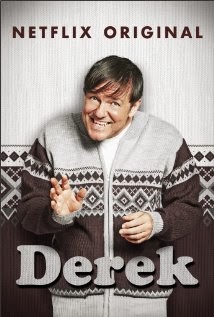 Netflix calls Derek a Netflix Original Series, but it's not. It was already on in the U.K., and now the first seven episodes are available on Screaming. It's been renewed for another season, but I hardly think seven shows constitutes an entire season. The ONLY seven episodes is a complaint on my part, because I love Derek.

Derek (Ricky Gervais), who's maybe not all there, works in a nursing home as a caregiver. I know we're accustomed to comedy with Ricky Gervais, but this show is a dramady. It's sweet and sentimental. Some people might think it's sickeningly sentimental, but Derek is so honest and openly loving and sincere that I don't find the show too sweet at all. Having worked in a nursing home, I adore seeing a show in which the people who work in this home truly love the residents and take good care of them.

I wish I could recommend this show for your entire family, but I can't because of the profanity and the occasional sexual innuendo. Teens might watch with you, but you should check it out first. The show makes a good teaching tool: The elderly are human beings. They might need diapers and they don't get around too well, but they are people deserving of our care and caring.

I like all the characters in Derek, especially Hannah (Kerry Godliman), who seems to be in charge of the home and is absolutely devoted to her job, to the point that it interferes with her romantic life. I like the little bit of romance, and I particularly like seeing a character who will end her date with a handsome man because a resident of the home is dying.

Yes, death is part of Derek, and it's handled delicately and lovingly. I really like an episode in which a daughter visits her mother only because she wants the mother's wedding ring. The daughter is told a thing or two by a staff member.

Derek earns The Janie Junebug Highest Seal of Approval. You can easily watch all seven episodes in one day, maybe while you're digesting your turkey.

Happy viewing, and I wish you a blessed Thanksgiving.


It's not too late to enter my giveaway. It's open to residents of the U.S., the U.K., Canada, Australia, and New Zealand. Prizes are books, Amazon gift cards, an Editor's Tip t-shirt, and $150 worth of editing by me.