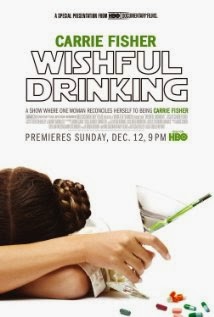 Though wistful and poignant at times, this film of Carrie Fisher's autobiographical stage show is also hilariously funny and very intelligent.

Fisher's life has been filled with celebrities (she's the daughter of movie star Debbie Reynolds and recording star Eddie Fisher). Fisher insists that when her mother calls, she always says, This is your mother, Debbie Reynolds. Fisher also tells quite a few stories about starring as Princess Leia in Star Wars. She says she weighed 105 pounds when filming started, but was told to lose ten pounds because her face was too broad. She then shows a photo of her ridiculous Princess Leia hairdo that, ironically, made her face look wider.

Normally, I don't think of addiction as amusing, but Carrie Fisher makes it very funny:


Carrie Fisher: You know how they say "Religion is the opiate of the masses?" Well I took masses of opiates religiously!

I laughed out loud multiple times while watching this show. It's kind of difficult to describe the interesting set, the great writing, and Fisher's excellent performance. But I think if you give this film a chance, many of you will enjoy it. It's not for children, but you can consider it for teens about 14 and older.

May the force be with you.

As I publish this post, you have 23 days and 15 hours left to enter my giveaway. If you follow my blog, you can have one entry every single darn day. You can earn five entries for becoming a new follower and then get the regular follower entry each day. Prizes include books, Amazon Gift Cards, a t-shirt, and $150 worth of editing by The Queen of Grammar.
Posted by Janie Junebug at Thursday, November 21, 2013