Yes, Academy Awards are presented on Sunday, so I have to quickly wrap up my posts about nominated movies I've seen.

You can see an earlier post I wrote about Hillbilly Elegy HERE (R; 2020; I watched it on Netflix). My word for this movie is sad because the characters have such difficult lives. 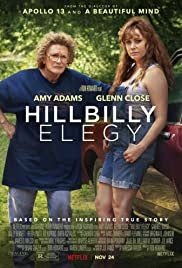 When Hillbilly Elegy came out, many expected Glenn Close and Amy Adams would be acting nominees. Glenn Close is indeed nominated for Best Supporting Actress.  Hillbilly Elegy is also nominated for Makeup and Hairstyling (Eryn Krueger Mekash, Matthew W. Mungle, Patricia Dehaney). I certainly understand the second nomination. It must have taken a lot of work to make Glenn Close and Amy Adams look unattractive.
This is not a movie I want to watch multiple times, or even a second time, because it's so sad.
It's Close's fourth nomination for Best Supporting Actress, and she's been nominated four times for Best Actress. We'll hear a lot of speculation about whether this is her time to take home a little, gold man. And we'll find out on Sunday.
I've looked at ways to live stream the awards (I canceled DirecTV because I got sick of paying for it), so if you watch on Sunday, I'll probably be watching with you.
Infinities of love,
Janie Junebug
Posted by Janie Junebug at Friday, April 23, 2021