When I moved to Florida I was surprised by all the lizards running around outside.

Then I was really surprised when the lizards sometimes came in the house.

So I made a deal with them. If they didn't come inside, then I wouldn't kill them.

They didn't keep their end of the deal. So I sucked them up with the vacuum cleaner (not a good idea because they stink stank stunk), or I stabbed them with a fork.

Eventually I gave up and learned to appreciate the sight of a lizard sunning himself on a window sill or darting around the living room.

About a month ago, this guy turned up: 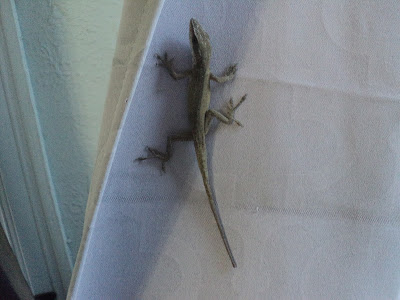 I took the living room curtains down to wash them, and there he was on the back of a curtain. I shook him off because I didn't want him fooling around in the washing machine.

He ran off to live in a closet in the foyer, but came out occasionally to torture Franklin and Penelope, who longed to remove his little lizard head. 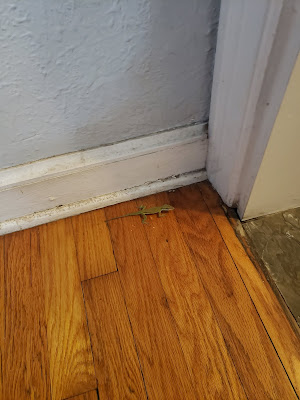 Today, though, I found his corpse. Lizards usually like to die under the piano, but my lizard friend was right in the middle of the living room. We had become such close friends. He was a quiet companion. I tossed him out the front door.