I'm pleased to say my word for Promising Young Woman is brilliant (2020; Rated R; I watched it on a DVD I received from Netflix during a free trial). 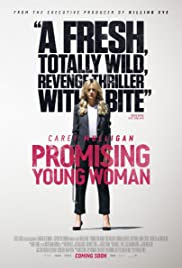 This battle cry for women is a dark comedy-thriller that features Cassie (Mulligan), who dropped out of medical school because of a disturbing, distressing event. Now she works in a coffee shop with Gail (Laverne Cox, absolutely love her). One day a fellow student from medical school, Ryan (Bo Burnham, also excellent) stops by, recognizes Cassie, and manages to gain her attention.

This movie took me by surprise. I'd heard good things about it and really wanted to see it. It more than met any expectations I had. Look for some images in the film that suggest Cassie as saint or angel. I would have been pleased if it had also gotten a nomination for Best Cinematography and/or Best Production Design. Cassie in her parents' home often looks as if she's about to step into a pink, surreal world.

Carey Mulligan is so, so good. I've enjoyed her work for quite some time, and she reaches her potential in Promising Young Woman. Her flat, American accent and expressionless face stand in such sharp contrast to any change in speaking and expression that she reveals.

These Academy Awards (airing Sunday night) are a big event for women. Only one woman has ever won Best Director (Kathryn Bigelow for The Hurt Locker). Now we have TWO women nominated for Best Director: Chloé Zhao for Nomadland and Emerald Fennell for Promising Young Woman. The two also have writing and producing nominations.

I would like very much to see this film or Nomadland win Best Picture, with the other winning Best Director. As for Best Actress, a win for Viola Davis, Frances McDormand, or Carey Mulligan will please me.

I won't be able to write about the other nominated films I've seen before the awards are announced, but we'll have time to enjoy plenty of movies later on. I've seen some excellent movies, some that are good, and a few I don't like. I enjoy it when you provide your opinion of the movies in the comments. If you've seen Promising Young Woman, please don't share spoilers. The shock value is important with this film.

See ya at the Oscars!