MOVIE WEEKEND: THE TRIAL OF THE CHICAGO 7 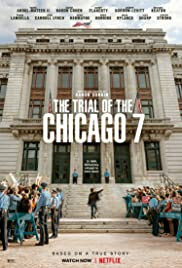 Of the nominated movies I've watched so far, this one is the most conventional, in that it clearly manipulates one's emotions with an exciting trial, its interesting cast of characters, and an even more exciting conclusion that has the observers in the courtroom cheering. Aaron Sorkin, who also directs, is good at taking events with a factual basis and fictionalizing them so they're exhilarating.

In 1968, protests at the Democratic Convention in Chicago were led by Students For A Democratic Society's Tom Hayden (Eddie Redmayne) and the Yippies' Abbie Hoffman (Sacha Baron Cohen) and Jerry Rubin (Jeremy Strong). Their activism led to charges against them and then an unfair trial presided over by the evil Judge Julius Hoffman (Frank Langella). Nixon was out to get them, but they had great pro bono representation and an assist from Ramsey Clark (Michael Keaton).

I remember hearing about the Chicago 7, and then the trial, on the news every night, but I was too young to understand what it really meant. I learned more about it when I was older, and feel I appreciate it more fully because of this movie in spite of the fiction. Because the movie is good, I read about the facts of the case.