Has anyone else watched Hillbilly Elegy (2020) on Netflix streaming? I'm a little confused by it. 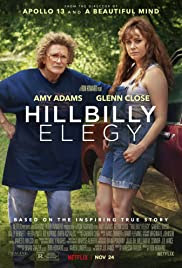 Hillbilly Elegy is based on the 2016 memoir by J.D. Vance, a book I haven't read in which I now feel interested. Glenn Close (Mamaw--Vance's grandmother), Amy Adams (Bev--Vance's mother), Gabriel Basso (adult J.D.), and Owen Asztalos (young J.D.) inhabit their roles––an ability I admire tremendously. Everyone else in the movie is great, too.  Ron Howard directs.

Adult J.D. has to leave Yale Law School, where he seeks a summer internship with a prestigious law firm that will pay him enough money to allow him to stay in school, to return to the town where he grew up, because his mother overdosed on heroin. We also see numerous flashbacks to J.D.'s younger years as he struggled to deal with his abusive mother and the addictions that apparently began when she was a nurse in a hospital and stole pain pills.

Young J.D.'s crusty, tough grandmother took him in and scared away his bad friends. She demands he pay attention to his schoolwork:

Mamaw: I don't care you hate me. I ain't in it for popularity. You gotta take care of business, go to school, get good grades to even have a chance.

So, what bothers me about the movie?

Does it magnify stereotypes or reflect real life? Mamaw and Bev deal with abusive men, never have enough money (it bugs me that Mamaw smokes like a chimney yet lacks funds), spout profanity constantly, and are quite nasty themselves. Mamaw gets rid of her cruel, drunk husband, but he lives down the street and they spend some time together. Bev goes from one bad man to another.

Real life: physical and emotional abuse exist and the cycle is hard to break, lots of people remain addicted to smoking no matter the consequences, drug and alcohol abuse are a never-ending problem, many people curse, and plenty of people are nasty. Mamaw and Bev probably would have been Trump supporters.

I hope you can see why I ask for your opinions of the movie. 'Tis a conundrum for this Junebug.

: I don't care you hate me. I ain't in it for popularity. You gotta take care of business, go to school, get good grades to even have a chance.