That time of year has rolled around again. I watch as many Academy Award nominees as I can.

This week my choice was Nomadland (2020; Rated R; I watched it on Hulu, but it's available in theaters). 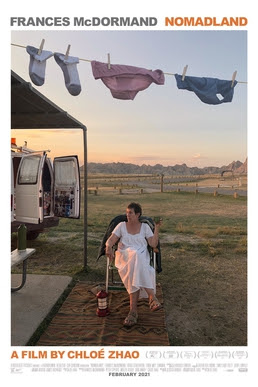 Nominated for Best Picture (the list of producers includes Frances McDormand and Chloé Zhao; Best Actress (McDormand); Best Cinematography (Joshua James Richards); and Director, Editing, and Adapted Screenplay (all for Zhao), Nomadland is the kind of movie that's beautiful without showing off.

Fern's (McDormand) husband has died. They lived in a company house in a company town. She has to leave and has no job.

So she buys a van she names Vanguard and takes to the road, living simply and working where she can. She meets others who are nomads, such as Dave, played by David Strathairn––the only other name actor in the movie. The rest of the nomads are played by real nomads, with Linda May as a standout.

Nomadland isn't filled with tropes. Fern and Dave become friends, but no big romance develops with him saving her. Fern has an opportunity to take a dog that someone else left behind, but it's not a drama with Fern saving the dog and the dog saving Fern.

Instead, Fern listens and learns from the nomads. Yes, the movie is about loss and loneliness, but more important, it's about the gain of human connections and the comfort of people helping each other.

Nomadland is a great movie.