Last weekend I watched Born Yesterday (1950, recorded from Turner Classic Movies and available for $2.99 - $3.99 on some streaming services). It helped me feel a bit better after the mob attempted to sully our beautiful U.S. Capitol Building in Washington, D.C. 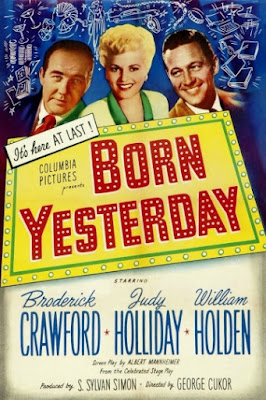 Judy Holliday won the Best Actress Academy Award for her first starring role in a movie. She had already originated the role of Billie Dawn on Broadway.
Billie has been junkyard tycoon Harry Brock's (Broderick Crawford) fiancée for seven years. They've traveled to Washington, D.C. so Harry can buy himself a congressman.
Harry thinks Billie is an embarrassment when they socialize with the congressman and his wife, although Harry is crude and disgusting. Harry hires journalist Paul Verrall (William Holden) to educate Billie.
Although Born Yesterday is considered a comedy––and it is funny––it also has dramatic moments. The cast is outstanding. George Cukor's direction is "superb."
Born Yesterday had me aglow when Billie and Paul visit the Capitol (it's not a set––they were on location). Billie marvels at the beautiful building as she absorbs Paul's teachings about U.S. history and democracy. It reminds me that the Capitol is a symbol of our democracy, a democracy that cannot be destroyed in spite of all the best efforts of any mob. The windows can be smashed and the speaker's podium stolen, but the building will be restored. Our democracy cannot be stolen from us.
Infinities of love,
Janie Junebug

Paul: A world full of ignorant people is too dangerous to live in.