THE CEPHALOPOD COFFEEHOUSE: MY SALINGER YEAR

It's time for The Cephalopod Coffeehouse, hosted by The Armchair Squid.
The idea is simple: On the last Friday of each month, post about the best book you've finished over the past month while visiting other bloggers doing the same.  In this way, we'll all have the opportunity to share our thoughts with other enthusiastic readers.
My book for March is My Salinger Year by Joanna Rakoff. 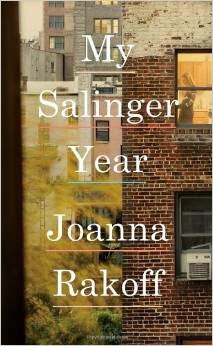 I purchased this book  HERE from Amazon.

When I saw the title of this book, I thought,  Say no. Run away. Tell Someone.

Then it kept turning up on all these best books of 2014 lists, so I decided that maybe it wasn't about a maniac who lived in the woods in New Hampshire for a year because she hoped she would meet J.D. Salinger and he would explain the meaning of life to her and what Zooey really thinks.

This memoir isn't really about Salinger. It's about Joanna Rakoff, who seems to have time traveled backwards when she gets a job at a literary agency where everything is written on typewriters. The entire office, including Joanna's boss, exists in the past, so it makes sense that one of their biggest clients, Salinger, hasn't published anything in decades.

Rakoff has little contact with Salinger, who is hard of hearing:

I picked up the phone and heard someone shouting at me. "HELLO? HELLO?" Then something incomprehensible.  "HELLO? HELLO?" More gibberish. Slowly, as in a dream, the gibberish resolved into language. "It's Jerry," the caller was shouting. . . . "WHO IS THIS?" he asked, though it took me a few tries to understand. "It's Joanna," I told him, nine or ten times, yelling at the top of my lungs by the final three. "I'm the new assistant."

"Well, nice to meet you, Suzanne," he said, finally, in something akin to a normal voice.

These exchanges with Salinger are few and far between. He comes into the office once while Rakoff works there. He gives her some good advice about writing, but it's just part of her Salinger year as she lives in New York and learns to be a grown-up and comes of age as a writer. Part of that coming of age is reading Salinger's books over and over. Ah, if it were only so simple. I can read books over and over, but I have to write to be a writer.

Rakoff wrote a successful novel called A Fortunate Age, which I would like to read. Her writing appeals to me because it's warm and uncomplicated and funny and open.