Ole! Do I have a great movie for you today (Ole! Tengo una gran película para usted hoy).
It's Chef (2014; Rated R; Available On DVD; Written and Directed by, and Starring Jon Favreau). 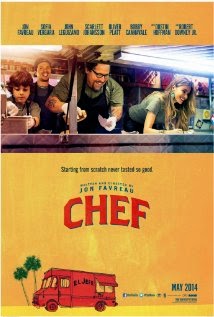 Prominent Chef Carl Casper (Jon Favreau) disagrees with the owner (Dustin Hoffman, who comes off as a real doofus) of the restaurant where he works about the menu to serve to a well-known food critic (Oliver Platt). Casper gives in to Doofus's menu commandment, even though the chef should be in charge of the kitchen, and receives a lousy review. After Casper has a confrontation--to put it mildly--with the critic and it goes viral, Casper no longer has a job. His life is in disarray. He has virtually no relationship with his young son Percy (Emjay Anthony), and he's divorced from Percy's mom, Inez (Sofia Vergara).

At first Casper rejects Inez's suggestion that he start a food truck, but when he gives in . . . well, you have to watch it to see what happens.

I love this movie. I love the screenplay. I love the way it's shot. I love the acting. Favreau is perfect. The kid who plays Percy (I could make fun of the name Percy, but I won't) is a great help to his dad, but not in that obnoxious kid is superior to parent way. I don't watch the TV show with Sofia Vergara and have no idea what it's called, but she seems like someone who would be your friend and wouldn't care that she's gorgeous and you're not (although I am). I love the concept of building I can't tell you what because it would be a spoiler, and I enjoy the Cuban culture in the movie.

Chef earns The Janie Junebug Seal of Highest Whoop-Di-Doo Approval because it's fun and cool and all sorts of good things. I did not watch this movie with Willy Dunne Wooters, but I know he'll love it. I'll probably order it again from Netflix, or buy it when the price comes down, so he can see it and I can enjoy it again.

I don't think Chef was nominated for any Academy Awards, but some critics had it on their lists of movies that might be nominated for Best Picture, although it would be a stretch.