DOCUMENTARY WEEKEND: WHAT I WANT MY WORDS TO DO TO YOU

I saw a great documentary recently. It's What I Want My Words To Do To You: Voices From Inside a Women's Maximum Security Prison (2003, Unrated, Available On DVD). 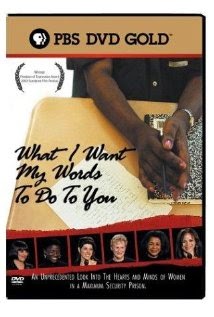 Playwright Eve Ensler (best known for The Vagina Monologues, which I've never seen but I love the title) conducts a writing workshop with some of the prisoners in Bedford Hills Correctional Facility for Women. According to Wikipedia, Ensler continues to hold these workshops and has done so since 1998.

What I Want My Words To Do To You gives us glimpses into the workshops and the writing of the prisoners, and we get to see performances of some of their work by such actresses as Marisa Tomei and Mary Alice.

Considering that one of my favorite things to say is WORDS ARE POWER, then I guess it won't come as a great surprise to you that I am moved by this documentary and give it The Janie Junebug Seal of Highest Feminist Approval. Also Non-Feminists Approval, just in case you think Rush Limbaugh is a god of some sort.

I was surprised to see some "celebrity" criminals in the workshop. More about that another day. I've noticed that I quite often write that I'll continue a topic on another day, and then I don't do it. One of the changes I hope to make to my blog is returning to a subject when I say I will.