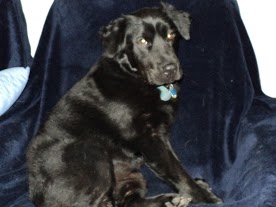 Scout died on Labor Day. I've put off telling you because I've been grieving. 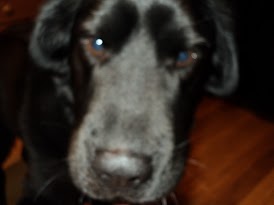 Scout and I were together for a long time. I adopted him in Illinois when he was about 18 months old. He had been hit by a car and left tied to a tree. His life was saved and from the moment I met him at an adopt a pet day, I thought he was quite affable. He knew how to sit and shake hands. If he slipped out the front door, he would pee on a bush or a tree and come right back in. He never ran away. He killed moles in our yard in Illinois. He was probably getting close to 10 years old.

When I sat at my desk, he sat at my feet. When the weather turned chilly, he slept on my pillow, curled around my head. He was the only one of the Z-Boys who could sit on my lap.

When The Hurricane was here last Christmas, she saw him on my pillow and said it looked like my head had been swallowed by a black dog.

Scout was kind of growly. I said it was because he thought he was a little black bear cub.

He wasn't a biter.

I felt sorry for him because Harper and Franklin became such good friends and Scout was kind of the odd man out.

It's my fault that he died, and I've shed a lot of tears over it. That's all I have to say about that.

The great blessings from God are that he spent some happy years with me and that right after he died, I was going to text Favorite Young Man to request his help. Before I could get to my phone, the doorbell rang. It was Favorite Young Man. He was here to take care of something else, but he ended up burying Scout. 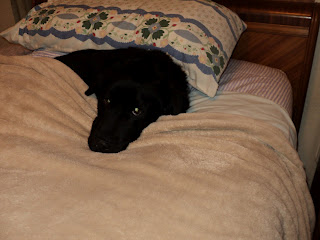 Scout, I love you, and I'm grateful for the time we had together. I'm sorry.