Today I present Admission for your viewing consideration (2013, PG-13, Available On DVD). 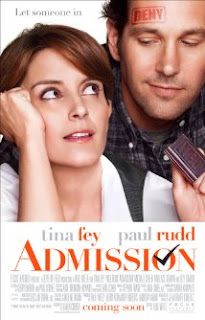 Portia Nathan (Tina Fey) is an admissions officer at prestigious Princeton University. She receives a call from a college classmate, John Pressman (Paul Rudd), who is in charge of a very unusual alternative school. John believes that his brilliant student, Jeremiah (Nat Wolff), is the son Portia gave up for adoption years ago. Follow-the-rules Portia becomes a renegade in her quest to get Jeremiah into Princeton, which he wants to attend.

I liked this movie a little more than I thought I would. It's supposed to be a romantic comedy, and, yes, it has some romance; but it's really not much of a comedy. I don't think I laughed once, but that doesn't mean it's a horrible movie. It's just more of a dramady with some mild, kind of offbeat humor.

I enjoyed seeing Lily Tomlin as Portia's mother. I can't remember the last time I saw her in a movie. It made me realize that I've missed Lily Tomlin.

I REALLY enjoyed the pompous ass English professor with whom Portia is involved at the beginning of the movie, but not because I liked him. He reads some Chaucer in Middle English and doesn't pronounce all the words correctly! Ha! Ha! I can read Middle English better than he does.

I like Tina Fey, and I really like Paul Rudd, but let's face it: This movie isn't much of a showcase for their talents. One good point is that the end is not completely predictable – at least it wasn't to me.

Admission hereby earns The Janie Junebug Seal of Ambiguity (second week in a row for this seal).

If you like the stars and you don't have anything better to do, you might enjoy Admission. It's not all that bad. It's just not particularly good.