GRATITUDE TUESDAY and WHAT? WEDNESDAY have agreed to give up their spots in the blog schedule this week in favor of, first, an interview with author Brandon Ax, and then on Wednesday, my review of his first novel, Elemental. You can purchase Elemental from Amazon at http://www.amazon.com/Elemental-Light-Bringer-Saga-Volume/dp/148414791X.

Here's part of the synopsis of Elemental from the book cover: Sophia's mother disappeared when she was six, leaving behind a broken father and sleep disturbed by silent terrors. Now, twelve years later, the nightmares that plagued her youth have suddenly returned. With dark creatures occupying her nights and a sense of restlessness consuming her days, all she wants is to finish school and get out of her small town as fast as possible. Everything changes when she is confronted with the realization that the shadowy beings from her dreams are real.

And here's the interview with Brandon Ax:
Q. What was the very first idea you had that led to the creation of Elemental?

A. Funny enough I wanted to write a comic book about people with elemental powers. It wasn't until Sophia came to my mind that it became a novel.

Q. What sort of planning did you do before you started writing? Did you know the complete plot or did you come up with ideas as you wrote? It's not difficult to follow the plot, but a lot is going on.

A. I do a lot of plotting in my head before I write. I am lucky enough to have a good memory for things and don't forget much. I also had some key points I needed to hit, but the actual writing itself sort of came as I wrote.

Q. How did you get inside a teen-age girl's head?

A. Well I was raised by a single mother and was the only boy of three children. I guess I have never had trouble understanding females. Also, I approached it as I would any character, they are a person with fears and desires just like anyone else.

Q. What advice do you have for other writers who want to publish books? How did you go about getting Elemental published?

A. Mostly to stick with it. Never stop writing even when you are trying to get a book out there, write another. You will only get better and a good book always has a chance. I self published Elemental, then Wayman Publishing found me.

Q. What are you doing to promote the book? What's working, and what isn't?

A. A lot of social media, Facebook, GoodReads, Twitter, and blogging. I wish I could say what works and what doesn't, personally, marketing is an area I need to get better at. In fact this has all been sort of a learning process for me.

Q. Are any of the characters based on real people? Sophia seems very real to me.

A. There are tidbits of people in some of the characters. As far as Sophia all I can say is, if you liked her you would probably like me and same goes for the opposite.

Q. How did you feel when you first saw a copy of the book?

A. Stunned, excited, overjoyed. It was almost as good as holding one of my children when they were born—almost.

Q. What can we expect from you next?

A. Well I just put out Ashes, the second book in the series and I have plans for one more. Also I have been writing on another WIP that I recently talked about on my blog. Trying to stay busy and relevant.

Q. I know you're a stay-at-home writing dad. What role do the kids and the dogs play in your work?

A. Well as any parent knows, time management is key to a productive life. It takes a lot of managing to make things run smooth. Some days it does, some days it doesn't. Still, they are my support and my encouragement and sometimes my muse.

Q. What else have you had published? I know Elemental is your first novel, but did you start with short stories or articles of some sort?

A. I wrote one short story for an anthology that I believe is coming out in November. Other than that Elemental and Ashes are my two works out there at the moment.

Last, but definitely not least, here's a photo of Brandon with his buddy, Sadie: 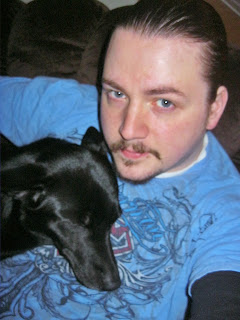 I hope you'll join me tomorrow for my review of Elemental. I'll give you a hint about what I think of it: It was hard to put it down.