Hi Hi Hi Every Buddy! It's me Franklin the Bordernese! 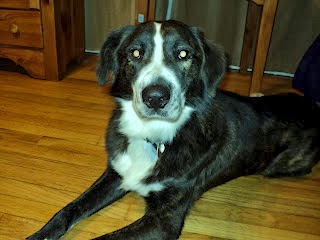 I learned about making words in color because The Hurricane used to have a boyfriend who went to Amsterdam and smoked a pot and then he saw words in color. That's ridicurous. I don't need a pot to change the color of words.

I'm writing about Twitter this week because I'm very excited that my mom is going to be the guest on a Twitter chat on October 10th. You should be ready for that special day.

If you don't have a Twitter account, you can go to twitter.com to get started. It can't be very hard to Tweet because Mom does it. *snicker*

Here's how you can join in the chat, or just lurk the way Nicki Elson said she would. It happens on October 10th at 9 p.m. Eastern Time (that means 8 p.m. Central Time, 7 p.m. Mountain Time, and 6 p.m. Pacific Time). You can log on at twubs.com/k8chat, and find more information about Twitter chatting at http://blog.bibliocrunch.com/how-to-join-a-twitter-chat/.

The nice lady who's in charge of the Twitter chat is Kate Tilton. You can see her Web site at ttp://katetilton.com.

The Twitter chat will be about strong female characters in books. Mom loves talking about stuff like that. An autographed copy of Dragonbait, a book that has a very cool princess character and was edited by Mom, will be given away during the Twitter chat.

I really, really hope you'll join the Twitter chat because Mom's never Twitter chatted before. She won't be as nervous if some of her blogger friends are there. You know, Mom cares about you all a whole big bunch.

Look at the next picture. I'm wearing my new necklace that Brandon Ax gave to me. Mom thinks it's hers, but I sneaked it out of her jewelry box. 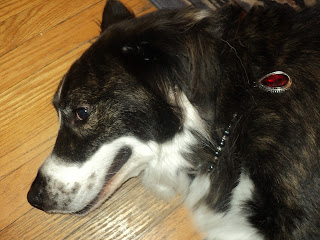 Snicker, snicker, sneak. HA! Gosh, that necklace is so bootiful on my fur.


I love you, Every Buddy!

Franklin the Bordernese
Posted by Janie Junebug at Friday, September 27, 2013