It's my third blogaversary. Whoo-hoo, and I mean that in the most mean spirited and sarcastic way possible.

I chose the Bon Jovi song above because this blog -- this thing -- it's my life. I just wanna live while I'm alive.

Well, I can pretend he said that.

So three years ago I sat down at my computer and set up my blog and my very first post was First Wife Hell -- Second Wife Heaven by Dumped First Wife. I didn't know then that I was going to evolve into that wildly pornographic Lola and then settle down into being plain old me, Janie Junebug.

Sometimes I worry I'm not as funny as I was when I was Lola, but you know, things change, and I'm one of them.

Now I have 151 followers, I've written 816 posts, and I've been checked out 40,762 times. I once had heady dreams of thousands of followers. Now I'm grateful for you 151 and anyone else who happens to stop by.

I'm also extremely grateful for the connections I've developed and the friends I've made. I never knew there was such a creature as a fishducky, and I love her so, along with Melynda and Rita and Dee and Sherry and Kianwi and loonysuse and The Frisky Virgin and Juli and Stephanie and Susan and Veb and so many other people, and I'm sure I'll be sorry I named names because no doubt I've forgotten to mention someone who is fabulous and fantastic and almost as adorable as I am.

If it weren't for blogging, I wouldn't have a middle child (Elisa), and I wouldn't have edited four books. I also hope to edit more, so if you're in need of a good but tough editor, then please let me know because I'll be glad to take your money and return your manuscript to you with corrections and suggestions for improvement. My email is dumpedfirstwife@gmail.com. I'm fast and cheap -- as an editor, that is. I gave up my fast and cheap ways as a woman when I met that scoundrel Elvis Aaron Schwarz.

I thank those of you who stuck with me during the time I had to take my blog private because a wicked witch who shall remain nameless but don't think I don't know who you are was haunting me with truly vicious comments. I am sad that my boy Maxwell stopped blogging, and really disappointed in dirtycowgirl, who said she would be my pretend lesbian lover and then dumped me so she could sell crap on ebay.

In second place is A Brief Tribute To My Father-In-Law, which touches my heart. Third place goes to Mr. Rogers Did Not Wear A Sweater To Cover Up His Tats. This post debunked the email that claimed Mr. Rogers was a grizzled war hero who wore his sweater to cover his many tattoos. I received that email so many times that I couldn't stand it anymore, and every time I receive an email that claims something stupid, like Obamacare calls for "death squads," then I'm glad I debunked at least one dumb email.

During these three years, the dog of my life -- my collie, Faulkner -- died. LegalMist doesn't post very often these days, but when she does, I'm there for her. She didn't know it at the time, but the night after Faulkner died, I was lying in bed, reading her comments on my then quite new blog. LegalMist got me through that long night.

Since then, Franklin has joined us. 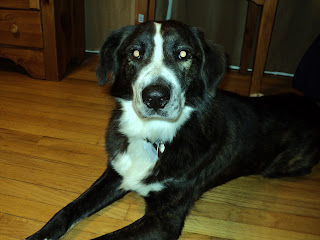 So when Bon Jovi sings "Frankie said I did it my way," he may think it's Frank Sinatra, but it's really Fankie Big Paws, the Mafia dog of Jacksonville, Florida, which at my blog house is Dogtown, where I live with the Z-Boys.