A few days ago I had a doctor's appointment (nothing wrong, but thank you for asking), and then I stopped by one of my neighborhood restaurants for a sandwich.

A man, woman, and young boy were sitting in the booth across from me. I wasn't paying much attention to them because as I waited for my food, I was reading Bill The Vampire by our friend Rick Gualtieri of The Poptart Manifesto. 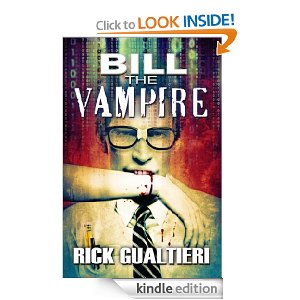 I couldn't help hearing the "gentleman" across the way ask the server where something from his meal was. I heard the server reassure him that it was on the way.

The server returned to the kitchen, and suddenly the man's voice became louder and louder and then out of the corner of my eye, I saw him use his arm to sweep all the food and drinks off the table. I got splattered, but it wasn't anything serious.

The man arose, followed quickly by the woman and little boy, demanded his bill (strangely enough), and then left immediately. I think the cook, a rather burly fellow, told him to just get out. Then I heard the cook call the police.

My server came back to check on me, and I asked her what was wrong. She said she had no idea -- that the man had eaten there before and had always been very polite, but on this day, he'd been rude from the minute he walked in the door.

I got out my money to pay my bill and was told to forget it -- having Sprite tossed at me earned me a free lunch.

I felt sorry for the woman and the little boy, and concerned for their safety.

I've seen people complain in restaurants -- the service is poor or the food isn't what they ordered -- but I've never seen anyone have a restaurant tantrum.

What about you? Have you seen anyone act that badly in public?

P.S. Bill the Vampire is safe. He didn't get hit with the drink.
Posted by Janie Junebug at Wednesday, December 12, 2012