THIS WEEK'S CURRENT STATE OF AFFAIRS

I'm taking a little time off from the happy chore of reading and reviewing my friends' books in order to write this -- my 700th post!

And no, I am not going to tell you 700 things about myself. You already know me all too well.

But the current state of affairs is as follows:


Does anyone know the identity of my very first follower?

That's right! The beautiful and ever-popular Little Chick! I love her so.

After a while, LegalMist came on board and started the ball rolling. She encouraged her followers to stop by my place to meet me. Before I knew it, I had 13 followers, and it stayed that way for quite some time. Then Cinderita wrote, How come Lola only has 13 followers? She encouraged even more folks to stop by and cop a squat.

And the little blog that could kept growing and growing, and I love each and every one of you. I wish I could name every person who has become my friend because of this blog, but it would take too long.

I have been Dumped First Wife, Lola, Janie Junebug, and now I'm a combination of Lola and Janie. Multiple personality disorder really can be fun.

The majority of my hits come from the U.S., with the U.K. in second place, and Ireland in third. Slovenia remains on the "hits" chart. I loves me my Slovenians, and they loves me back.

You still haven't seen me, except for the back of my head: 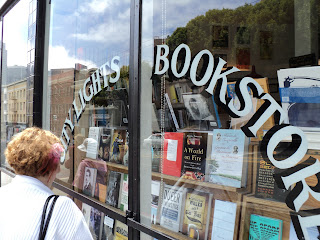 I hope you think it's a nice head. The Head was in San Francisco at City Lights Bookstore when The Hurricane photographed The Head.

As for search terms used to find me, I still think the funniest is "fucking my skinny wife." People who ask Google why Mr. Rogers wore a sweater may end up at my post explaining that Mr. Rogers was never in the military and he wasn't covered in tats. He wore sweaters because his mom made them for him.

Now a little information about this, the week that still is:

It's hasn't rained in a few days. The water has receded considerably. I have one swirling little pool of tadpoles desperate to stay alive. I think my attempt to start a tadpole farm will fail. Boo-hoo.

The Hurricane called recently to say she had been at rowing practice (she rows crew), and the coach told the team to row to a different dock than they usually use because something had been found in the water. The team went to the other dock. At their dock, they could see that the police and other rescue personnel had removed a body from the water -- a very sad sight indeed. The Hurricane's shoes were on their dock, so they became part of the crime scene. A member of the team drove her home so she wouldn't have to ride her bike wearing socks and no shoes. The police questioned The Hurricane because she had a murderous look in her eye. They wanted to know what time she was on the dock and what she saw, which, Thank You God, was absolutely nothing but water. Then they asked if it was Colonel Mustard in the dining room with the knife.

The Hurricane felt a bit overwhelmed and wrung out by her morning. I hope this is her final experience with corpses. She used to row in a park, but at one point it was shut down for quite a while because murder victims washed in from San Francisco Bay.

When will killers learn they can't get rid of a body by weighing it down and dumping it overboard? Right, Scott Peterson? You nasty little so-and-so.

I filled out an application for medical insurance. It should be in effect next week. I have documents that go with it, and I thank so many of you for advising me in my insurance hunt that concluded with Miss Scarlet in the ballroom with the revolver.


Tomorrow, I have a question to answer. I need to work on a short story this weekend, and I hope to do more reading. When I post next week, the first item on my agenda is to review Twelve Habits of Highly Successful Cats & Their Humans by our beloved Dulcy and Dee Ready. To purchase the book now, please visit http://www.amazon.com/s/ref=nb_sb_ss_i_0_13?url=search-alias%3Dstripbooks&field-keywords=twelve+habits+of+highly+successful+cats+and+their+humans&sprefix=twelve+habits%2Cstripbooks%2C289.

P.S. It was really Dr. X in the billiard room without a clue.