It's raining.
It's pouring.
But I doubt if I'll be snoring.
The frogs are so loud.
They gather in a crowd.
The plague keeps me awake all night.
I look like a fright.

Although I am thankful for life-giving water after a year-long drought, my backyard is a pool, making it difficult for the dogs to find a place to go, if you know what I mean. If this downpour continues, soon I shall have my very own tadpole pool.

Well, let me tell you about two movies. 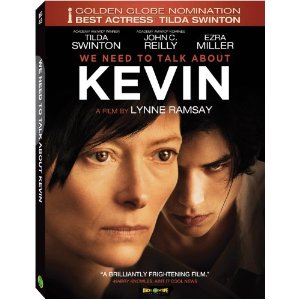 The first is We Need To Talk About Kevin.

This movie is brilliant. It's well made and the acting is superb.

However, it is frightening. It is shake-you-to-your-very core scary.

And I don't mean it has zombies. Eva (Tilda Swinton) is young Kevin's mom. John C. Reilly plays Franklin, Eva's husband and Kevin's dad. Two young men play Kevin -- one as a young child and one as a teenager. The young actors have an amazing talent for portraying Kevin's malevolence.

But why is Kevin evil?

Franklin is partly to blame with his boys will be boys attitude.

Some of the blame may rest with nature.

So how much blame rests with Eva? She can be incredibly patient with Kevin and incredibly cruel to him. Remember how doctors used to say that if a child was autistic it was because the mother was cold and uncaring?

I hate that (disproved) theory, so I was reluctant to blame Eva because although Kevin is not autistic, he is incredibly vicious and inhuman. But then I woke up and remembered that we see events from Eva's point of view.

ONE CAN NEVER COMPLETELY TRUST A FIRST-PERSON NARRATOR.

We see what Eva allows us to see, and it is horrifying. If you experience health problems, are prone to sleepless nights after seeing something frightening, or are just plain very sensitive, then I recommend you not watch this movie. Otherwise, please watch and learn. You will see an outstanding film with a strange bluegrassy/country score that fits its weirdness perfectly.

We Need To Talk About Kevin is new to DVD.

A slightly older movie is my second choice for this week. It's called Limitless and stars eye-candy man Bradley Cooper, whose talent is so much better served here than in those dumb Hangover movies. 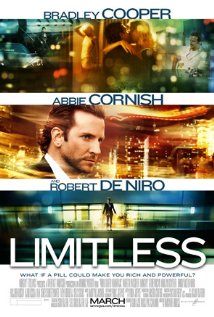 But it has a drug problem and needs to go into rehab. Cooper's character, Eddie, is a writer who doesn't write -- even though he actually has a book contract! What wouldn't we all give for that?

Then Eddie takes a pill that provides him with limitless abilities and intelligence. Before long, I started to feel that the movie glorified drug use. When Eddie faces death because of the drug, I started to think the movie was headed in the right direction -- because a drug used illegally and incorrectly can cause such harm.

I don't want to tell you what happens with the drug and Eddie. It would spoil the movie for you. But I was not pleased with the end. You might want to watch this movie so you can see that Bradley Cooper really isn't just another pretty face, but I wouldn't let kids watch it. If older teens see it, then you should have a family discussion afterwards.

I recommend these movies with trepidation and with warnings. If they're not a good fit for you, then watch a silly comedy that won't damage your psyche.

I hope you have a lovely weekend. I hope to see the sun shine.