In case you didn't see my update on Nomadland, it won British Academy Film Awards for Best Film, Best Director, and Best Actress.

My word for Nomadland is beautiful, and my word for Ma Rainey's Black Bottom is lush (2020; Rated R; it had a limited release in theaters and is now available only on Netflix, where I watched it). 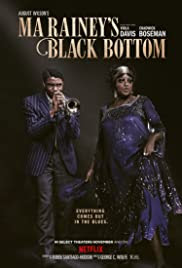 It's 1927. Ma Rainey (Viola Davis) is late. She's supposed to be at the recording studio, but she arrives when she wants to arrive. No matter that the white executives want to control her. They can't do it.

But the situation there is tense. Ma is not happy, and she becomes even more unhappy because of the behavior of her young horn player, Levee Green (Chadwick Boseman). Tension builds and builds and builds until it breaks.

Ma Rainey's Black Bottom is based on the play of the same name by August Wilson. It is so well written. I have yet to see Viola Davis give a performance that isn't astounding, and her portrayal of Ma Rainey is no exception. I confess I wondered if Chadwick Boseman was nominated at least in part because he passed away from colon cancer after completing this movie, but I certainly don't think that now. He more than holds his own against a number of veteran actors and is outstanding.

Netflix also has a 31-minute documentary called Ma Rainey's Black Bottom: A Legacy Brought To The Screen. I recommend it. It helped me understand the costume and make-up choices.

I hope you have the opportunity to watch this movie and appreciate it as much as I did.