I went with BREAKING NEWS because I see it on my news channel all the time. How can everything be breaking news? At least the PBS news hour is a more traditional show. Favorite Young Man likes to watch it each evening, so I join him in that.

FYM ended up being very busy with home improvements after he promised to make one improvement and then kept putting it off. He made the other improvements as a way of keeping busy while he avoided what he had promised. In the end, he fulfilled the promise and did a whole lot more, so I was thrilled.

FYM's initial offer entailed repairing a gouge in the laundry room wall and painting one side of the laundry room (one side was fine because painting behind the washer, dryer, and a cabinet wasn't necessary). The gouge occurred when the front panel of my old washing machine fell off about nine or ten years ago.

First, he filled in the gouge: 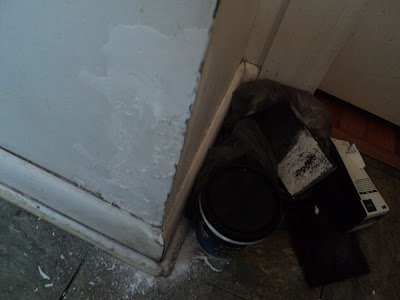 Then he avoided painting––which he hates to do so I don't know why he suggested it––by putting up a new handrail next to the front steps: 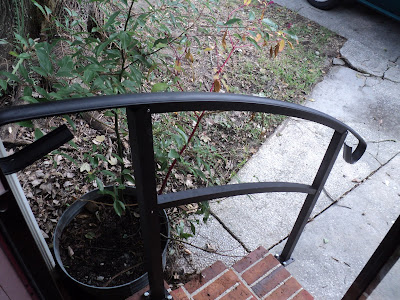 The old rail broke a couple of years ago. The new one is much sturdier. 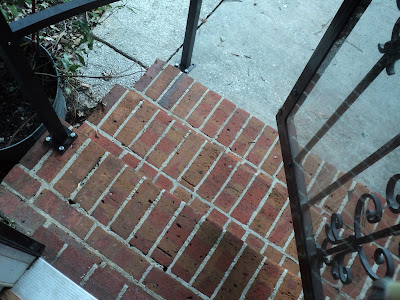 The front steps are in the shade. Mold grew on them. They were slippery. Now they're clean enough to eat a meal on. He also cleaned all of the concrete in the front and the back of the house, and cleaned the deck. The deck is rotting and needs to be replaced, but until that happens, at least it's clean.

He bathed Franklin and Penelope, which is a home improvement because it keeps away the doggy odor. They didn't like it, but he did it anyway.

Then he organized everything in the garage and cleaned it out. We also got rid of an old couch because the house is a bit crowded. Now I can walk through the living room without dodging furniture and we have plenty of room for the Christmas tree.

The moment of truth arrived. Would he paint? YES! 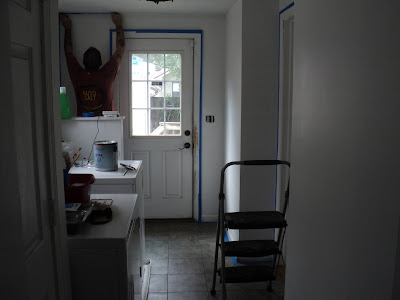 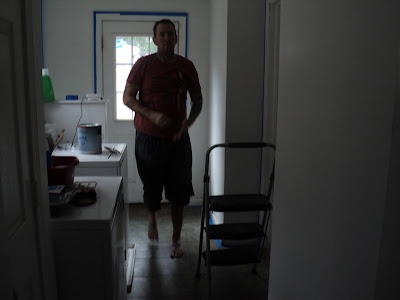 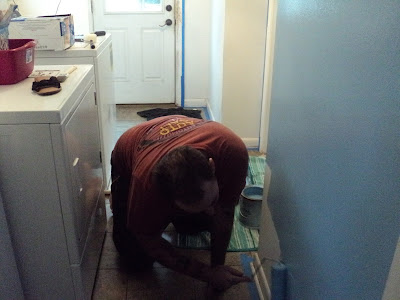 I love the cheerful blue that he chose.

And here's the finished product: 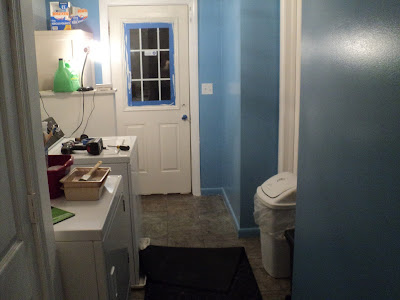 He also painted the backdoor, which remains white: 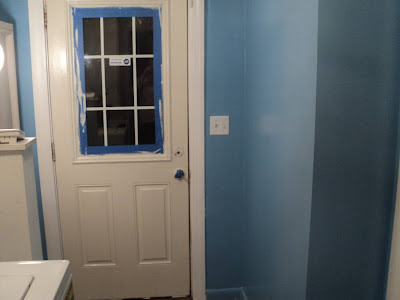 Finally, he removed the tape.

FYM said that Penelope is not allowed to put her paw on the door when she wants to come in. I distract him from that command by telling him when he gets home from work that I put my paw on the door. He laughs. All is well.