TIP TUESDAY: SO TO SPEAK BY THE SILVER FOX

Today I present The Silver Fox, who blogs at The Lair of The Silver Fox (where else could he possibly blog?), with his tips for writing dialog. Considering that The Silver Fox writes the best dialog of any blogger I know, I hope you'll take his thoughts to heart, and I hope you'll follow his blog. Even if you aren't interested in comic books and dead celebrities––he writes some killer short stories, too––I recommend that you read his blog every time he posts something because he's a great writer. We can all learn from the greats. 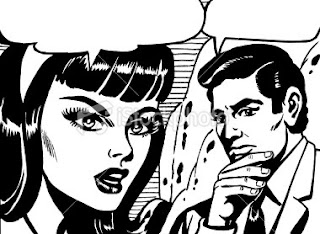 Today's post is a "simulcast" of sorts, due to be posted on my blog and on Janie Junebug Righting and Editing, the blog of "Janie Junebug." That's all you need to know, I guess.

People who've read stories that I've written have often complimented me on the way I write the dialog -- or "dialogue," if you prefer -- between my characters. Janie asked me several months ago if I would be interested in writing a guest post for her blog. Typically, I procrastinated, but finally, here it is.

In the guise of presenting this as a cohesive article, I'm just going to give you a bulleted list of random thoughts on the subject of dialog, in no real order.

I'm sure there are several other points that I should have mentioned and didn't, but I think this'll do for one post!

Thanks for your time.

Janie Junebug here: Thank you, Silver Fox, for enlightening us. I love your writing! And I think you'll like knowing that I do use "vituperative" in my everyday life.
Posted by Janie Junebug at Tuesday, September 26, 2017