The Big Sick is a quietly funny movie with an interesting history (2017, Rated R, Recently Released on DVD).

The movie stars Kumail Nanjiani, a stand-comedian who plays himself, and was written by Nanjiani and his wife, Emily Gordon. It's loosely based on their real-life relationship. 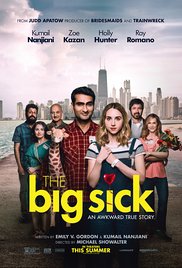 Pakistani-born Kumail and his family have lived in the U.S. for years, but Kumail's parents still expect him to follow Pakistani traditions, such as having an arranged marriage. They also want him to become a lawyer.

Instead, Kumail has become a stand-up comedian, and he falls in love with an American girl named Emily (Zoe Kazan). Their relationship falters, though, when Kumail refuses to introduce Emily to his parents. He can't even bring himself to inform his parents that he has a girlfriend, and that he's not interested in any of the Pakistani women to whom they introduce him.

I like this movie a lot. It has some poignant moments, but ultimately, everything works out (I say this for those of you who need to know that the movie won't depress you and there's a  happy ending, but I don't think it's really a spoiler because I already told you that Kumail and Emily are married and they wrote the movie together; you should also take a look at the closing credits because they include some photos of Kumail and the real Emily, and Kumail's parents).

The Big Sick earns The Janie Junebug Seal of Highest Approval. This is a movie I'll want to see again when it turns up on HBO or Netflix streaming. For my first viewing, I watched a DVD mailed to me by my friends at Netflix and delivered by my friendly neighborhood mail carrier.

Happy viewing! Beck, will you sing us out, please? Devils Haircut is part of The Big Sick's soundtrack.