A Swedish film, En man som heter Ove, which in English is titled  A Man Called Ove, is the perfect movie to watch this weekend to cheer you up, whether you're sad about Hurricane Harvey, worried about North Korean missiles, sick of the 45th president, or all of the above (2015, PG-13, Available on DVD and free on Amazon Prime Streaming). This movie is in Swedish with English subtitles. 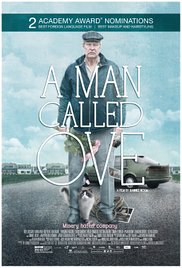 Ove (pronounced oo-vay and portrayed by Rolf Lassgård) is a man alone. His beloved wife Sonia has died. He's being forced into retirement. He's the Grumpy Gus of his neighborhood, where he demands that everyone follow the rules.

He visits Sonia at the cemetery regularly, where he promises her he is going to join her. Ove then sets out to commit suicide, but what could be tragic turns comedic as one thing after another interrupts his attempts. The worst interruption of all is by his annoying new neighbors from Iran, who do nothing but cause him grief.

As the movie progresses, we see flashbacks to Ove's boyhood and his youthful romance with Sonia that help us to understand what kind of person he really is: a man with a heart of gold who goes to great lengths to help those in need in spite of the personal cost.

A Man Called Ove earns The Janie Junebug Seal of Highest Approval. It was nominated for Best Foreign Language Film at the 2017 Academy Awards and is based on the novel of the same name by Fredrik Bakman. I haven't read the book, but I certainly want to do so now. Its overarching theme is my favorite––the interconnectedness of humankind.