MOVIE WEEKEND: IT'S A WONDERFUL LIFE

Several years ago I spoke to a young person who said she had never seen It's A Wonderful Life. Horrors! Moreover, she swore she did not know who Jimmy Stewart was. I was appalled, simply appalled. My children did excellent Jimmy Stewart impersonations by the time they were eight years old. Thus I began my one-woman campaign to encourage everyone on God's green Earth to see It's A Wonderful Life (1946, Unrated, Available on DVD and shown on television every year during the Christmas season). 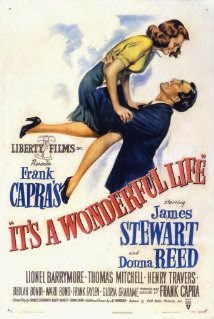 Don't be fooled by this color picture promoting the movie. It's a black-and-white film, although that so-and-so Ted Turner colorized It's A Wonderful Life. The movie's star, Jimmy Stewart, was one of many to join film industry professionals who opposed the colorization of movies.

Stewart plays George Bailey, a man who longs to go to college and travel the world, but ends up running his late father's Bailey Building & Loan with the assistance of his bumbling Uncle Billy (Thomas Mitchell). George is married to Mary (Donna Reed). They have four children. One day Uncle Billy goes to the bank, owned by nasty old man Potter (Lionel Barrymore), to deposit $8,000 for the Building & Loan. He accidentally hands the money over to Potter, who does not return it. Now the money is lost, which leads to a crisis and the possibility that George will be sent to jail. George stands on a bridge and he jumps in the water, not to commit suicide as he had intended, but to save the life of Angel Second Class Clarence (Henry Travers), who longs to earn his wings.

Clarence grants George the unique opportunity to see what the world would have been like if George had never been born. And the rest is history.

Of the ninety-two movies Jimmy Stewart made, this one was his favorite, and George Bailey was Stewart's favorite role. Director/writer/producer Frank Capra's choice for his favorite movie among the many he made was It's A Wonderful Life. It's also my favorite Christmas movie, and my all-time favorite movie.

It's hard to resist a film in which the characters' prayers for their beloved friend/family member George Bailey are answered in person by an angel. I also love a happy ending.

Some people think this movie is corny (hence the term Capracorn), but I think it's sweet and beautiful and well made. The acting is ideal.

My favorite scene is one in which George sits in a bar and begins to pray:


Capra did not shoot this scene as a close-up, and, of course, computers and CGI and all that weren't available at the time to help Capra change the shot. Thus, he used an optical printer* to gradually enlarge the frames so we slowly see a close-up of George Bailey.

My favorite lines from It's A Wonderful Life are when George tells Mary:


George Bailey: What is it you want, Mary? What do you want? You want the moon? Just say the word and I'll throw a lasso around it and pull it down. Hey. That's a pretty good idea. I'll give you the moon, Mary.
Mary: I'll take it. Then what?
George Bailey: Well, then you can swallow it, and it'll all dissolve, see... and the moonbeams would shoot out of your fingers and your toes and the ends of your hair... am I talking too much?

It's a Wonderful Life makes me happy for so many reasons, and I hope you'll allow it to make you happy, too. On another day, perhaps I'll write more about Jimmy Stewart. Though my favorite contemporary actors are Johnny Depp and Ryan Gosling, my favorite actor forever and always is Jimmy Stewart. He was nominated for the Best Actor Academy Award for It's a Wonderful Life. He didn't win that year, but he's never been anything less than a winner with me.

It's a Wonderful Life earns The Janie Junebug Seal of Highest Joyful Approval.

*The optical printer was invented during the early 1930s and wasn't readily available for use until the mid-1940s. It allowed the director to do almost anything he wanted with the film. The optical printer is a movie camera and projector that face each other so individual frames from the film can be rephotographed and changed. In addition to making a medium shot into a close-up, an optical printer could achieve many effects including the following: create a freeze frame or a split screen, change the speed of the action, create transitions such as fades and dissolves, and add title credits