MOVIE WEEKEND: HEAVEN IS FOR REAL

I have a movie for you that moved me because of its spiritual nature. Willy Dunne Wooters and I watched it on Thanksgiving after dining on turkey. It's Heaven Is For Real (2014, PG, Available On DVD, but we watched it on Starz because Starz was free all weekend). 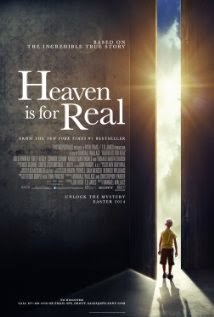 I didn't know anything about this movie, but it has "Heaven" in the title (a plus), and it stars Greg Kinnear (another plus). I cleaned up as quickly as I could after we ate because I wanted to watch the Greg Kinnear movie. WDW said, I like Greg Kinnear, too.

So we sat down, and I was surprised to see a story unfold that's based on a true story, which usually means that Hollywood has exaggerated the story. However, WDW and I did some research. We learned that the movie does not deviate much from reality as the family portrayed in the movie experienced it.

Pastor Todd Burpo (Greg Kinnear) serves at a small church in Nebraska with his wife Sonja (Kelly Reilly), who is in charge of the church's music program. During 2003, Todd and Sonja take their son and daughter on a little vacation. When they return home, both children are horribly sick with what seems to be a stomach bug or flu. Their daughter recovers, but almost four-year-old son Colton's (Connor Corum) condition deteriorates.

Todd and Sonja rush Colton to a hospital, where they learn he has a ruptured appendix--a life threatening event. Colton is rushed into surgery. Later, he tells his father about events he witnessed while he was on the operating table, events about which he couldn't have known. Todd questions his son, who explains that he went to Heaven and saw Jesus. He says that Jesus has a horse that is all the colors of the rainbow, and Heaven is like Earth, except everything is brighter and more beautiful. Everyone is young, too, which Todd learns from Colton when he says he met Todd's grandfather. Colton only recognizes "Pop" from a photo taken when he was a young man.

Colton tells his parents many details about Heaven, and eventually--with the help of a painting--he answers his father biggest question: What does Jesus look like?

I felt a bit sad to see that Heaven Is For Real doesn't have very high ratings on the Internet Movie Database, nor on Rotten Tomatoes. I loved it. Greg Kinnear is perfect in his part as the earnest pastor. Little Connor Corum is so sweet and innocent. He does very well in his first movie role.

And how can you beat a story that reveals some of the realities of Heaven?

The movie is based on a book by Todd Burpo, also titled Heaven Is For Real. It was released in 2010 and became a best seller.

Willy Dunne Wooters agreed that the movie is touching, but I wanted to slap him because he kept complaining that the image of Jesus in the movie is promoted only by very conservative Americans. I don't see what difference it makes. Supposedly, most people who have a Near Death Experience see the Savior in whatever image they have in their minds from their lives. For example, Colton says Jesus has greenish-blue eyes. One of his parents has green eyes. The other has blue eyes. The important facet of the movie to me is that Heaven is for real, as I've know for so long. I love the affirmation. For me, Jesus will probably have dark eyes.

Heaven Is For Real earns The Janie Junebug Seal of Highest Approval. I don't think I'd allow young children to watch it. They might be afraid they'll die if they get sick. Otherwise, I think it's a great movie to watch during the Christmas season, unless you're such a skeptic that you can't possibly enjoy anything about it.