I watched the season four premiere of Downton Abbey yesterday, so we can talk about it now. We won't say too much, though, just in case you haven't seen it yet and want to do so.

Well, what did you think of the show? Lady Mary is certainly the picture of depression. She's so thin she's a stick (so is Lady Cora). Her eyes are sunken. She looks quite the walking corpse. It's good that Tom has her taking an interest in the estate. When she went on his rounds with him, did you notice she wore her mauve coat and hat instead of the black? That's encouraging.

Anyway, today's question is Who is your favorite Downton Abbey character?

It's not easy for me to answer. I know a lot of people don't care for Lady Mary, but I like her because she's so bitchily honest. 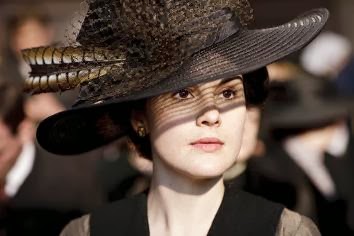 I can't help loving Anna. She's so good and so determined. Talk about loyal. Remember that incident with Mr. Pamuk during the first season? Anna helped out with the corpse. She wanted to protect Lady Mary. And then there's Thomas. He's hideous, but it's fun to have hateful characters. We don't want everyone to be good all the time. How boring.

Speaking of Thomas, do you believe that O'Brien really up and left? Or do you think it's possible that someone murdered O'Brien and then was able to dress in her clothes and make it look as if she left? I can think of someone who could and would do such a thing. I doubt if we've heard the last of O'Brien.

But I know who my favorite character is. She's bitchily honest, yet loving and compassionate. I have to choose the Dowager Countess, Violet. 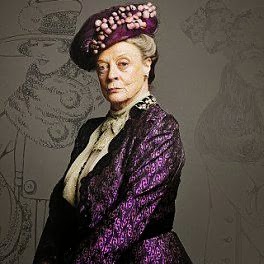 Her little asides, which aren't always asides but often are spoken quite openly, are hilarious. Yet when she arrived for darling Lady Sibyl's funeral . . . oh, my. How I cried. And she really does try to help people. She's not cruel. She's just old enough to say what she thinks, and she's not afraid of getting involved in other people's affairs.

Now how about you? Who is your favorite Downton Abbey character?

Did anyone else watch the preview special for season four? It was hosted by Susan Sarandon. It's fun to see the characters as the people they really are. Anna, with her hair down, is startlingly beautiful. Edith, with her hair down and her nose still beaky, is startlingly unattractive. Mrs. Hughes doesn't look like Mrs. Hughes. I was shocked at the sight of her. Thomas is hot, and I do mean sizzling.

I'm so glad we have Downton Abbey to enjoy each week–for a while. We'll have to discuss suitors for Lady Mary as they pop up.