This is the second week in a row that I'm going to present a movie I don't like: Identity Thief (2013, Rated R, Available on DVD). I've seen two DVDs that I absolutely love, but I'm not telling you about them because I'm too sick to do them justice.

Okay, in this piece of crap Sandy Patterson (Jason Bateman) has his identity stolen by Diana (Melissa McCarthy). Sandy is so frickin' stupid that when Diana calls him posing as someone from something, I think it's his bank or credit card company, to "verify" information, he fricking tells her everything. All the stuff we're warned not to do, and you know what? I do stupid things, too, but this is just too stupid because Sandy lives in Colorado and he actually drives to Florida to pick up his thief and take her back to Colorado. Stupid road trip ensues.

I kind of liked one little somewhat heartwarming moment at the end.

Jason Bateman and Melissa McCarthy, you are too good for this movie. Do you need money that badly? Are you afraid that if you don't work all the time that you'll never work again? Don't you have any money from the TV series you were on?

I'm especially disappointed in you, Melissa, because you were Sookie on MY show, and you were really good. I realize that some of you don't know that I am the real Lorelai Gilmore from The Gilmore Girls, and The Hurricane is Rory Gilmore, except she's mathematician Rory instead of journalist Rory because newspapers are going down the toilet. Here's what I really look like: 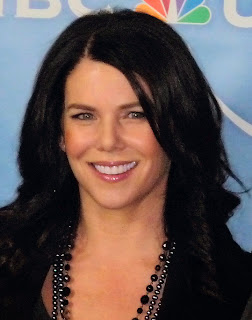 I look good, don't I? Melissa, you played my best friend and chef at my inn and you were so sweet and nice. Why do you make crappy movies now?

Jason Bateman, I don't remember what show you were on, but you were very good in Juno, even though you ended up being not very likable.

Stop making these stupid movies. Just stop it. I don't think you should let kids watch this movie unless you want to show them an example of a bad movie. Besides, it's Rated R.

If you like this movie, then more power to ya. I want you to be happy. But with me, Identity Thief earns The Janie Junebug Seal of Crabbiness and Crappiness.

And, no, I wasn't sick when I watched it, but I'm sick now and blogger isn't working right. It's not fair.


Infinities of love and sickness,