MOVIE WEEKEND: BEHIND THE CANDELABRA

I'm still in the doldrums. These people are trying to interfere with my ability to earn a living, which I don't do already. Why make it harder for me?

At least I have a great movie for you this week. Today I present for your consideration Behind The Candelabra (2013, Rated TV-MA, Originally An HBO Movie, Now Available on DVD). 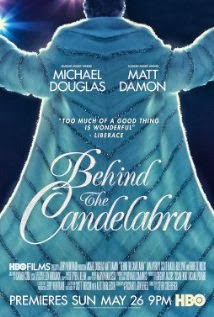 This movie was directed by Steven Soderbergh. Need I say more?

I suppose the answer is "yes". For those of you not up on your Soderberghiana, this man is the Academy Award winning director of Traffic, a truly great movie. Soderbergh has directed a lot of other great movies, too, some of them more artsy and some more popular with the commoners, such as Ocean's Twelve – is that the right number? Maybe they also made a Thirteen. Anyway, I saw Twelve. It has George Clooney in it, and it's cute.

Soderbergh amazes me because he serves as his own cinematographer. He shoots a movie, and while he's shooting it, he edits it IN THE CAMERA. The man can finish shooting a movie and have the complete product a few days later. I've never seen a Soderbergh film I didn't like.

This particular Soderbergh movie is very enjoyable. It's about the relationship between an aging Liberace (Michael Douglas), called Lee by his friends (if he actually had any), and a much younger man named Scott Thorson (Matt Damon). Damon wears a wig in order to look younger than his 42 years. He does look younger, but not as young as the real Thorson was: The affair began when he was 16 years old, but no mention of this age is made in the movie. Suffice it to say that Damon looks good.

Lee seems to fall passionately in love with Thorson. He insists that Thorson have plastic surgery so he'll look more like Lee. He promises to adopt Thorson and leave everything to him, but Thorson never signs the will. Besides, promises are made to be broken. A younger, prettier boy comes along for Lee, and Thorson is out.

I was surprised at Michael Douglas's ability to pull off a Liberaceful performance. Though not quite as effeminate as the Liberace I recall, Douglas takes on a flamboyant air and adds a slight nasal whine to his voice so he sounds rather similar to the pianist. Behind The Candelabra is just campy enough to be funny without being over-the-top ridiculous.

The cast is filled with stars. Damon is very good, as is Debbie Reynolds, who plays Lee's mother. Rob Lowe is Liberace's plastic surgeon, who has had too much plastic surgery himself (Lowe suffered from the uncomfortable effects used to create his look). Scott Bakula plays the friend who introduces Thorson to Lee. Dan Akroyd is Lee's manager.

This movie is so good that it left me with one question: Why wasn't it a theatrical release?

I found my answer on the Internet Movie Database (IMDb): In a January 2013 interview with the New York Post, director Steven Soderbergh said that this movie was originally planned for a theatrical release but was ultimately produced by and aired on HBO instead because the story was "too gay" for Hollywood movie studios: "Nobody would make it, We went to everybody in town. They all said it was too gay. And this is after Brokeback Mountain, by the way, which is not as funny as this movie. I was stunned. It made no sense to any of us."

Well, Behind The Candelabra isn't too gay for me. I love it.

Behind The Candelabra earns The Janie Junebug Highest Seal of Approval.

P.S. I forgot to mention that this movie is not for children, and you'll want to watch it with your teens, if they're even interested in it. Liberace and Thorson do some making out and fondling, but I don't think Candelabra has nearly as much sexual behavior as Brokeback Mountain, which The Hurricane loved because of what she described as "smokin' hot gay cowboy sex". What can I say? I raised interesting children.
Posted by Janie Junebug at Thursday, October 24, 2013