It is with great joy that I call to your attention The Great Gatsby (2013, PG-13, Available on DVD). 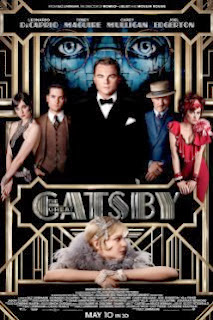 I approached this movie with great trepidation because it is based on my all-time favorite novel, penned by The Almighty F. Scott Fitzgerald. I couldn't imagine that anyone would ever make a movie based on this book that would please me, but Baz Luhrmann did.

It's 1922. Jay Gatsby (Leonardo DiCaprio) returns from The Great War determined to find the girl with whom he fell in love while training to become an officer – Daisy, so beautiful, and in Gatsby's mind, the image of a perfect past he wants to regain. Daisy (Carey Mulligan) has married the wealthy and brutish Tom Buchanan (Joel Edgerton). Gatsby, now wealthy himself – through nefarious means – moves into a mansion where he can see across the water the green light at the end of the Buchanan's dock. Gatsby asks a mutual friend to approach his next-door neighbor – Daisy's cousin, Nick Carraway (Tobey Maguire) – to arrange a meeting between Gatsby and Daisy. Gatsby and Daisy meet at Nick's house for tea. Joy and tragedy ensue.

First, I'll tell you what I don't like about this movie. I don't care for the framing of the story with Nick Carraway in a mental institution because he's become an alcoholic. He tells his doctor the sad story of Gatsby and Daisy, and then writes the book, giving it the title Gatsby and then changing it to The Great Gatsby. (A bit of trivia: The institution is called The Perkins Sanitarium because of Fitzgerald's close relationship with his editor, Maxwell Perkins.)

Also, I don't like Joel Edgerton as Tom Buchanan, but perhaps this dislike is appropriate because Tom Buchanan is not meant to be liked.

I was worried that the score, which includes hip-hop, would be stupid, but it's not. It energizes the movie and helps it to move at the pace that it should: the pace of The Jazz Age, with bootleggers and wild seemingly endless parties at Jay Gatsby's palatial mansion. The costumes are beautiful. Carey Mulligan is fine as Daisy, though I wonder why she doesn't have at least a bit of a Southern accent.

But most of all I like – no, I love – Leonardo DiCaprio as Gatsby. I've never been much of a DiCaprio fan. I didn't go all googly eyed over Titanic. But somehow DiCaprio pulls off Jay Gatsby perfectly. Perhaps it's his air of mystery. I am particularly pleased with DiCaprio's accent. I recognize it. It is the accent of a man who comes from nowhere and wants to come from someplace special. It is an attempt at the accent of a man who attended prep school and Oxford and has had money all his life. He does not want to appear to be nouveau riche.

I will not be surprised if DiCaprio is nominated for the Best Actor Academy Award and wins it. It will be difficult to beat this performnce.

My only regret is that I didn't see this movie in a theater. I suspect it's fabulous on a big screen in 3-D.

I continue to edit. I wish you happy viewing!


Nick Carraway: Gatsby believed in the green light, the orgastic future that year by year recedes before us. It eluded us then, but that's no matter - tomorrow we will run faster, stretch out our arms farther... And one fine morning - So we beat on, boats against the current, borne back ceaselessly into the past.
Posted by Janie Junebug at Thursday, October 31, 2013