Last weekend I watched an excellent four-part documentary series streaming on Netflix. Keep Sweet: Pray and Obey delves into the lives of the Fundamentalist Latter Day Saints––the polygamy-loving Mormons who force women into marriages in which they might be the second wife, the third, or the twentieth. 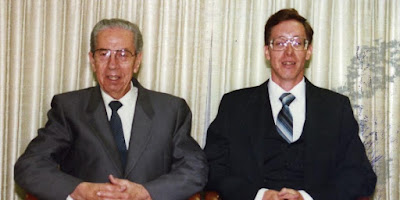 Their president from 1986 until his death in 2002 was Rulon Jeffs (left above), known as the prophet, who ended up with 60 - 65 wives and as many children. Many of his wives were underage. It was not their idea to marry Uncle Rulon, as he was known. Some of the wives describe their experiences in the series. They were shockingly ignorant of what would be expected of them in marriage, with no comprehension of sex.

Rulon often told young people to Keep sweet, which meant they should control their emotions. Protesting their lot in life, which could include domestic abuse and rape, would do them no good.

Before Rulon died, he singled out his son Warren as his replacement. Life for FLDS women became worse. All of the women had to dress the same and have the same hairdo. He moved his band of fools to the Utah-Arizona border, where the "church" owned all the property and a man who might be a threat in some way lost his home, wives, and children. Those wives were then married to other men, and their children became the children of the new husband. 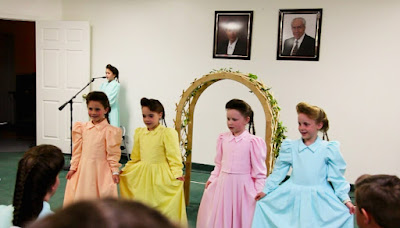 Dozens of young boys, who would one day want to marry, were cast out to live on the streets of Salt Lake City and other communities.

Warren, not satisfied with simply marrying most of his late father's wives, took on his own circle of young girls to "marry" and rape, including at least one 12 year old. When he moved the group to a new location in Texas, it proved to be his undoing.

The series made my heart break for those girls, but after reading Under The Banner of Heaven by Jon Krakauer and watching the series of the same name on Hulu, I was relieved to know that some of the women have escaped from polygamy and now have the opportunity to provide a face and a voice to the stories of their suffering.