TIP TUESDAY: WHAT DO YOU WANT--GOOD GRAMMAR OR GOOD TASTE?

Are you old enough to remember the Winston cigarettes advertisement? Winston tastes good like a cigarette should.

Complaints about the bad, bad grammar in that slogan led to the addition of What do you want––good grammar or good taste? 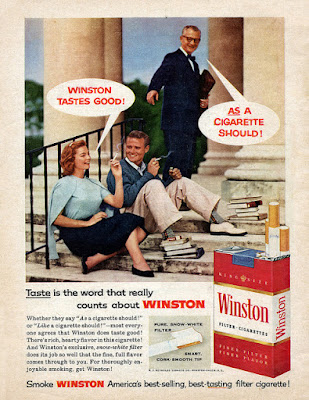 The problem with the slogan, as the professor in the poster points out to his smoking students, is that it should be Winston tastes good as a cigarette should.

Should you use like or as in writing that you hope will be published?

The great bible of grammar, The Chicago Manual of Style, explains:

"The use of like as a conjunction (as in the old jingle 'like a cigarette should') has long been a contentious issue. Purists insist that as must introduce a clause and like must always be a preposition coupled with a noun {cool like springwater}. The fall of the old rule has been predicted for five decades, but today like as a conjunction is still not standard."

I think the answer to like or as lies in the formality––or lack thereof––required in your writing. A formal article requires traditional grammar. A character in a novel who is fussy and formal and named Janie Junebug needs as in her dialog. It's a descriptor of the character. If you write more casual or even bad grammar for a character, it's equally descriptive.

Always use the correct word for your writing.

Please keep in mind that on your blogs, I don't think it matters if you use like or as, but stay away from those coffin nails.

P.S. If you haven't voted in my Battle of the Bands, I hope you'll visit This Post to choose between Boyz II Men and Jack Black. The song is "Let's Get It On." I'll announce the winner on October 7.  I love your Battle of the Bands votes and comments.
Posted by Janie Junebug at Tuesday, October 04, 2016