TIP TUESDAY: THOSE PANTS ARE GRAY OR THOSE TROUSERS ARE GREY

If you're publishing a book in the United States, then you need to use American English spellings and conventions. The bible of U.S. book publication, The Chicago Manual of Style, states that American publishers change British usage to American usage, unless the word is in quoted material or you're J.K. Rowling about halfway through writing the Harry Potter series.

I think most of us know the difference between color and colour. Our British--and Canadian--friends use neighbour, flavour, litre, meagre. In the U.S., we've dropped that "U" and changed the "-re" to "-er." A British spelling we often co-opt is theatre. Maybe some theaters think it makes them fancy-schmancy to be called theatres. A former friend in Illinois once told me that theatre is the correct spelling, and no, that's not why she's my former friend.

But some spellings are not as well known. When I edit, I see many errors in books with gray spelled as grey. We're gray. They're grey. The next one might be more of a usage issue, but it also falls under spelling. We go toward the chocolate bar in the kitchen. They go towards the tea kettle in the kitchen. Toward written as towards is another common mistake. 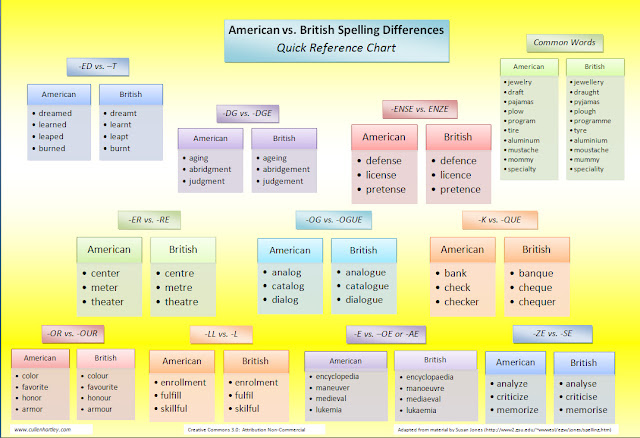 Now here's a spelling many Americans use––and you might disagree with me about it––but both the Associated Press and Chicago insist on adviser, not advisor. But hey, if you're not writing a book for publication, then go ahead and consult with your advisor. It's no skin off my . . . teeth.

Here's a Web site you might find handy: https://goo.gl/vEUba9 has a list of American v. British spellings along with some rules and other resources.

I'm touched––and not by Donald Trump––that so many of you expressed concern for our welfare during Hurricane Matthew. Thank you.

Fishducky sent me this link and told me that everyone should read this blog post:

If you're a committed unto death Trump supporter, then you can read it if you want to get even more angry. However, if you want some affirmation for your support of Secretary Clinton, then you'll find it here. More important, if you're undecided or think that you won't bother to vote because you don't like any of the choices, then please read the post. It might help you understand the importance of voting for Hillary Clinton.