All righty, then. Let's have fun! Our song is This Land Is Your Land. 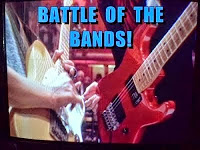 I think pretty much everybody in the U.S. grew up singing this song in school. We thought it was a patriotic song, and even if you know the story behind the song and the verses that are left out when children sing it, then maybe you'll still feel it's a patriotic song. I do because I believe in freedom of speech, and I truly believe this land wasn't made for me alone. I'm no better than anybody else. We are all sinners in the eyes of God, and we can all gain His love and forgiveness simply by asking Him for it.

Or if you believe in something else, that's up to you, as long as you don't use what you believe to hurt anyone.

Woody Guthrie wrote This Land Is Your Land in 1940. It's partly about experiencing the Dust Bowl during The Great Depression. He tended to change it up when he sang it, so the verses varied during performances. I hope I have time this week to tell you more about the song.


Please vote in your comment for your preferred version of the song. Do you favor Woody Guthrie's straightforward singing of his own work, or are you partial to Bruce Springsteen's rendering of the song? Tell us the reason for your decision, too.

Normally, I wouldn't put up any singer against Woody Guthrie, but I know Bruce Springsteen has many die-hard fans so he has a good chance at earning your vote.

I hope you'll visit other participants in The Battle of the Bands. You can find the complete list below.