We've been having unusually nice weather. I've only had to turn on the AC twice during the past month, and only used it for about 24 hours each time. For the most part, we've had pleasant sunny days and cool nights.

And then it started raining Thursday night, and it's still raining. My backyard isn't just a pond. It's a lake.

I think it's safe to say that our spring rains have begun.

When we have serious rain, the frogs croak ALL NIGHT LONG. They're so loud that it's hard to sleep. Plus, they say things with those croaky noises. I wrote about this last year, and some of you scoffed at me; but I am telling you, these frogs talk. And talk and talk and talk. 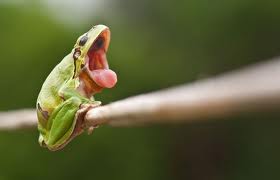 Last night I was having a little trouble deciphering what the frogs were saying to me. One group seemed to croak AMP, while another group croaked ER. Amper? Were they trying to say hamper? Did they think I was letting the laundry pile up?

Finally I realized they were saying DAMPER. Apparently some frogs were telling other frogs which part of the yard was damper. I don't know if they wanted to be in the wettest area, or if they were hoping to find dryer ground. If they want dryer, then they should go to Hot Young Anthony's house. He had a fancy drain put in his backyard last year.

I am so jealous of that drain. I can't have a fancy drain because


Okay. So I knew the frogs were saying damper. I got up to take an antihistamine and a couple million Valium, and then I tried again to sleep. I managed to get in a couple of hours before they woke me again by croaking WHORE! WHORE!

What? How dare they! Sweet Young Allison is pregnant. But they were talking about me, weren't they? I certainly hope so.

Anyfrog, I am tired. I hope for a little peace tonight, and I wish you all the same.

On Monday, be here for my review of Divine Temptation by the adorable Nicki Elson. You can go ahead and order the book right now. You don't have to wait for the review because I'll give you a hint: I LOVE DIVINE TEMPTATION!!!!!!!!!

Was I subtle enough for you? You can purchase Divine Temptation on Amazon at http://www.amazon.com/Divine-Temptation-Nicki-Elson/dp/1623420083. Wow! Only one left in stock, but more are on the way. Cool beans, Vebarino.