We so seldom write real letters these days. We dash off quick emails, or even worse, we text someone while we're in the middle of doing a million other things that simply must be done right that minute.

But there's such a joy in receiving a real letter–a letter that tells a personal story, a letter that helps you know the writer better, a letter reminding you that the writer really is your friend. A letter from a friend has a certain intimacy that an email, nah, it's just not there.

Life Happens: Enjoy the Ride by Rick Watson is a compilation of columns he's written for his local newspaper in Alabama. But as I read each one, I felt as if I had received a letter from Rick written just for me.

And every single letter made me happy because the letters provide me with a record of the happenings in the life of a close friend.

I've interviewed Rick the past two days (for Part I click HERE and for Part II click HERE), and in the interview he said his favorite column in the book is "A Family of Restless Spirits." I can see why that's his choice. It's so beautifully written. It starts like this:

This week I've spent time at Davis Cemetery, where my folks are buried. Decoration is the second Sunday in June, and it takes a while to get the old cemetery in shape.

It's a peaceful place most of the time. My mom, dad and brothers are buried at the top of the hill, close to the service road that encircles the graveyard. I was there one evening this week, sitting on the tailgate of my truck, giving them updates about what's happening in my life.

And that's exactly what Rick does in his columns. He gives us updates on his life. He doesn't rant and rave about politics or how much he hates this or that. He enjoys gardening, and he loves going fishing.

And he's quite often very funny. Like the time he and his wife Jilda checked into a hotel and the young man carrying their bags thought that Rick was Jilda's dad:

I heard him say, "I see you brought your dad with you." That would have been OK with me if he'd been trying to score some points with Jilda, but he was serious.

Jilda smiled as she looked back over her shoulder at me. When the bellhop looked back at me, I blazed him with a look that probably would have caused second degree burns on his face and neck had he been a step closer.

Once he unloaded the bags he lingered for a tip. I thought to myself, we'll find cures for cancer, heart disease, and stupidity before I give you a tip, sonny boy. Of course he probably could have taken early retirement with the tip Jilda gave him.

Rick doesn't go for the big guffaws. He's relaxed and understated. Life Happens is a great book to read at bedtime so you fall asleep knowing that God is in His Heaven and all's right with the world. 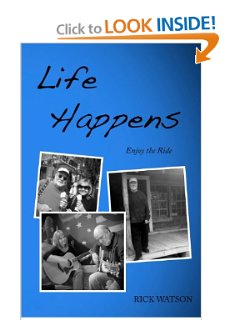 Life Happens by Rick Watson has The Janie Junebug Highest Seal of Approval. You can purchase it from Amazon at  http://www.amazon.com/Life-Happens-Holler-Scholar-Volume/dp/0615677738.

I have one more thing I want to say about Rick. Not too long ago I asked a favor of him. He didn't ask why. He didn't hesitate. He emailed back with "Sure thing, girlfren."

That's the kind of person Rick Watson is.