Favorite Young Man and Little Chick have presented me with the loveliest gift: a new granddaughter.

F.Y.M. has already given me Stella to love. She stays with me when he has to go out of town. American Bulldog + Boxer = Adorable Underbite

But then last week F.Y.M. got home from work rather late one day. He decided to walk up the street near his house to get a slice of pizza. In the distance, he saw a puppy walking behind a couple and thought she might be on a lead.

But a few minutes later the couple walked on and the puppy didn't. Then he saw the puppy in a parking lot. She was filthy, incredibly thin, and wearing a dirty strip of cloth around her neck that was obviously way too tight. It might have been a bandanna at one time. He befriended her and picked her up and took her home with him. He said, I couldn't just go off and leave her.

Don't you love that? How many people passed that puppy and just left her? But not F.Y.M.

F.Y.M. got the cloth off the baby's neck, bathed her, and gave her a healthy meal.

You can see the bones sticking out of her back and sides. The white piece around her neck is a bandage because the cloth had become embedded in her skin. 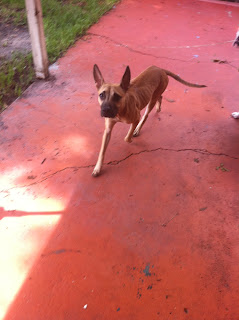 Here's her neck after about a week of tender loving care. I know it looks nasty, but believe me, it was much worse. 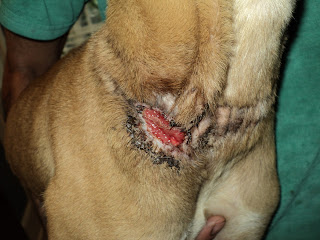 And now see how she's improved after such a short time. She's starting to fill out a bit, and one of these days, she might even grow into those German Shepherd ears of hers. 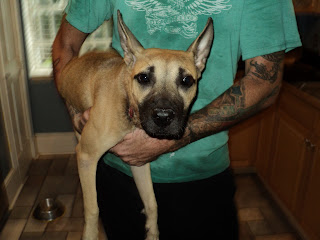 Favorite Young Man tends to the young lady every evening and gets up with her at night because babies have to go potty frequently. I suggested he put her in her crate at night so he could get some sleep, but he said No, she already has to spend too much time in her crate.

Little Chick usually works nights, so she checks in on the baby during the day and is training her with praise, not punishment. Little Chick says the baby will have to learn soon that she isn't a lap dog.

I think it's safe to say we're all in love with her. She barely knows me, but she sits on my lap and kisses me.

Her name is Liesl.

Infinities of love and Liesl,

And they lived happily ever after.


*NOTE: Please beware of putting a collar or anything else on an animal that could become too tight. Check for correct collar size frequently so you aren't shocked to discover that a collar or something else is embedded in your pet's skin.
Posted by Janie Junebug at Friday, September 30, 2011

Email ThisBlogThis!Share to TwitterShare to FacebookShare to Pinterest
Labels: A Great Dog, Lola Likes This, Who's The Cutest Pet?